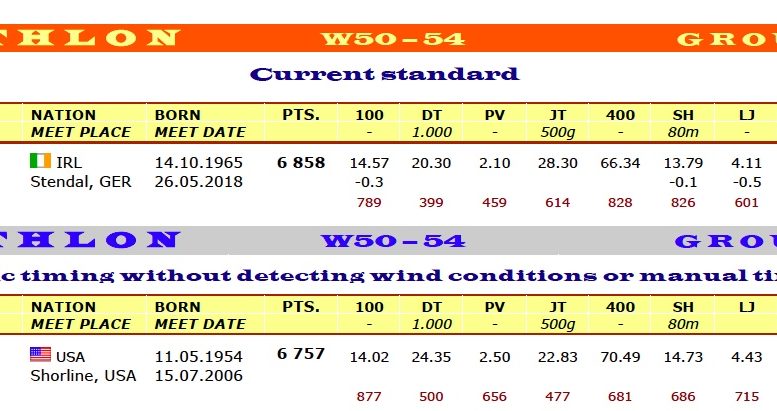 Dieter Massin of Germany shares news of an unofficial WR in the W50 decathlon. (Unofficial since WMA contests the women’s hep, not dec. Hence no records kept.) Dieter writes: “In 2010 these [age] factors changed; Bernd Rehpennig was the person in charge and he got an ‘order’ by WMA to revise all factors. Due to this change of factors, the results of Rita Hanscom are less than before, see the attachment. In regard to the performance of Geraldine Finegan in Stendal 14 days ago, the result of Geraldine is ‘unofficial’ world record. By the way: Bernd Rehpennig has created a list of the top ten in [women’s] decathlon and heptathlon.” That list is still to come my way. Stay tuned. The chart should give women entered at the end of this month at the USATF masters national combined-events meet in Grass Valley, California, something to shoot for. And Rita, our San Diego friend, will be gunning for another record, this time in W60. For more info, see Jeff Watry’s Decamouse site. Here’s coverage of the last major masters women’s dec — in 2009 at Shoreline, Washington.