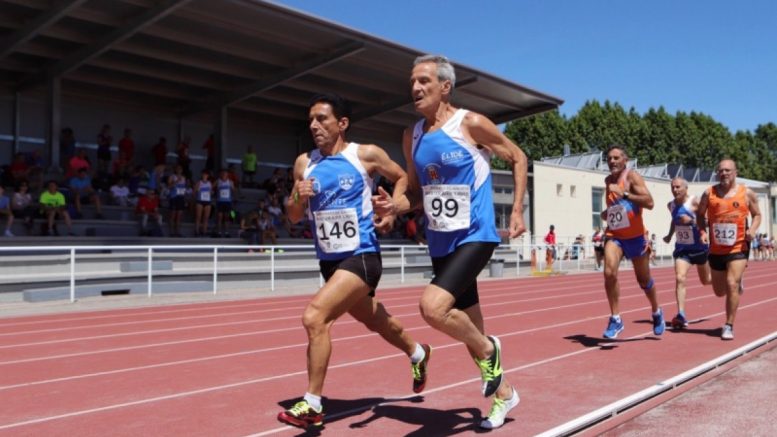 José Vicente Rioseco (the tall gent) scorched a 1500 at the Galacian masters championships.

Hicham El Guerrouj, meet José Vicente Rioseco. Twenty years ago, the Moroccan miler set the still-standing world record for 1500 meters of 3:26.00. So what can we say about José? On Saturday, the Spaniard ran the age-graded equivalent of 3:24.1. But José is 77, so he’ll have to be content with a M75 world record of 5:11.27. The listed WR is 5:22.40 by Shichiro Midorikawa of Japan in 2007 (although another outdoor mark of 5:22.35 by Frenchman Jean Louis Esnault is legit, and late Canadian superstar Ed Whitlock ran an indoor 5:20.04.) A Spanish track newsletter noted Jose’s mark “during the course of the Galician masters championship played in Pontevedra.” Just FYI: The listed M75 American record is 5:28.5 by Scotty Carter back in June 1992. José also holds the listed M75 WR for 800 meters at 2:30.5.

Here’s a report on the latest WR:

It was Saturday in the Galician Championship Master of Athletics that was played in Pontevedra … José Vicente Rioseco, who on April 30 turned 77, stopped the clock in 5: 11.27 in the test of 1,500 … new record of the world of the category of more than 75 years, surpassing the previous record in 11 seconds and running at an average of 3’27 “/ km.

“We can not deceive ourselves: age does not forgive, but if we know how to make our virtues work … why are not we going to continue there? We can live more than 100 years of life and if we do not live them, it’s because we do not take care of ourselves enough because we eat too much, either because we smoke too much or whatever, “explains sport Rioseco, who also has the best 800 in the world since 2016, with 2: 30.59 in the Galician Master Championship that season was held in Vilagarcía.

The recipe has no mysteries: healthy lifestyle … and training. “I get up at eight, I start training at nine and I do not come home until two, I do not think there are elite athletes who train more than I. But this is a good way of life that strengthens me and reinforces my strength. decision to be healthy … Then there is the gym where I work with weights (rowing, elliptical …) and finish with a 1,000 or 1,500 in the pool to unload … I do up to 50 meters diving … I do not think the The fact of being a doctor has been an advantage in my life, it does not have to, I do not do anything extraordinary and to do what I do, I do not even have to know much medicine, who does not know that salads have many colors or that sugar and salt are almost two poisons? “, says the Galician doctor, who has between eyebrow and lower 5 minutes in the 1,500 …