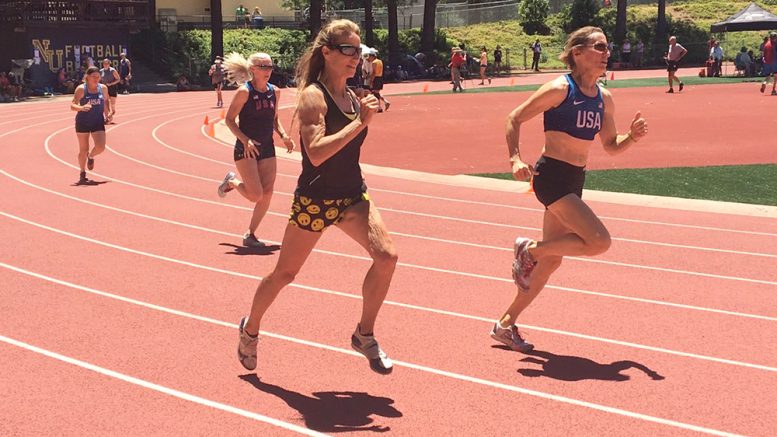 This weekend’s USATF masters women’s decathlon is in the books. All that’s left is the shouting over who set world age-group records. (No official lists are kept, but these marks will likely get wide recognition.) See results here. I suspect most of the six entrants will lay claim to some WR or AR, given changes in age-graded factors and implement weights since the last major masters women’s dec in 2009. (The dec also was contested in 2011 in Dallas. And Jen Freemas set a W35 AR in 2015.) One thing is certain: Nobody at Nevada Union High School was in the same time zone of Nadine O’Connor’s W65 mark of 10,234 points.

Formally called the USATF National Masters Combined Events Championships, men also competed — along with traditional heptathletes in Grass Valley, California. (The inaugural Open Women’s Decathlon Championships was held, too, with no change in men’s event order — a big deal since the “women’s order” — with vault on Day 1 — is considered unsafe by some.)

Becca Gillespy Peter of polevaultpower.com tweeted a slew of photos and updates, and Rob Jerome posted amazing images to Facebook. The oldest dec’er was 93-year-old George Roudebush of Ohio, with 1816 points. (He was DNF in the 400 and 1500.) Men’s results are here. A big shout-out to Red Cap Timing for expedited results.

Huge shout out to Mary Trotto.

After finishing day 1 of her decathlon, she stuck around to rake the LJ pit and shag shot puts for the open women ❤️ #womensdecathlon

I just now noticed the official in the background trying to will him over the bar 😂😂😂 https://t.co/rhZfsXZVWN

1 Comment on "WRs set in masters women’s decathlon in Grass Valley — only question is: How many?"