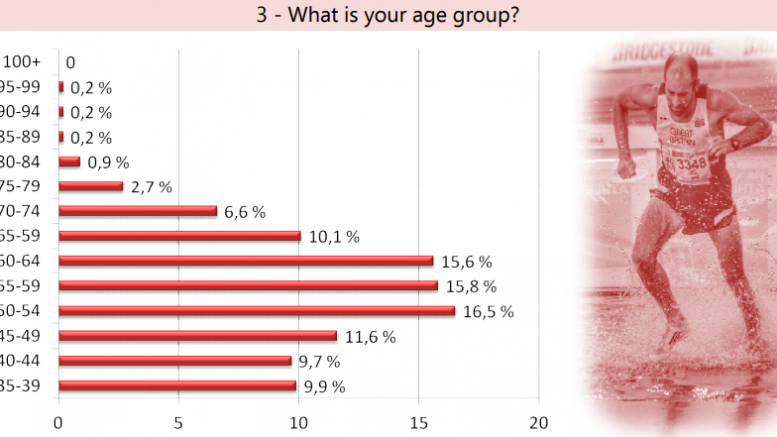 Based on this chart, about 115 answered the age-group question. So we can assume that's close to the overall figure.

In its latest survey, WMA asked Malaga athletes, officials and coaches what they thought. And I’ve obtained a copy of results. No exact data on how many answered. But of 8,000 entrants, roughly 115 took part — based on the “What is your age group?” question. That translates to a participation rate of 1.4 percent. Atrocious. But even if the sample is almost worthless, the 23-page “Masters Athlete Survey Post Malaga” has its moments. At the end, key comments are listed. Some are doozies.

The feedback purportedly represents “most discussed topics.” (I suspect it’s almost every comment.) The last one below suggests IAAF procedures weren’t followed on throwing event finalists. Not good.

In any case, check these out:

1. Little used stadiums. There was no need for 4 places.

2. Medals must be delivered to the competition arena.

3. Catering needs to be addressed, with adequate facilities for athletes and supporters to be able to get hold of food and drink on site.

5. It is not necessary for throwers to have numbers on the front and back. The back is fine.

7. Merchandise to purchase would have been good. No souvenirs to buy apart from clothing.

8. Wi-FI and recording are a must.

9. The ‘calling room’ procedure was poor – why not use a board or flip chart to show which event is being called, and which will be next?

10. Need to do better job with security in the athlete area. This area was to be secure and could have been done better to protect the athletes particularly in the main stadium.

1. Location was good, but the following issues were poor – lack of free WiFi, inadequate toilet facilities. And all finals should be at the main venue.

2. Catering at the main stadium was inadequate.

3. The Malaga championship was well organized considering it was spread over four stadiums, it was a massive turnout of athletics and I think it ran pretty smoothly over all.

4. It is a great event, I decided to continue with this championship in years to come. It is a great opportunity to meet world class athletes and share their experiences and get to know them.

5. Very poor communication in English by loudspeaker at events.

6. Need to do a better job with security in warm-up/call room area. Overall a positive experience.

8. Too many venues, spreading events too widely and putting pressure on both athletes and officials.

10. The Registration check in, it was a disorganized mess.

11. Separating events in the same discipline, over different days/venues made supporting fellow athletes difficult, if not impossible. Presenting medals for events at the main stadium, requiring athletes to leave the venues at which their fellow athletes were still competing, in order to make a lengthy journey to attend the ceremony, was most inconvenient and unsettling. Please can medal presentations be made at the same venue as the competitions, and competitions in similar events be allocated to the same venue and sequential times so we can all watch and support each other. Catering at the main stadium was inadequate.

12. Must look at timetabling of event Heat, SF Final. In Middle Distance less than 17 hrs between. How are athletes supposed to prepare properly for a World Final in such circumstances?

14. Facilities for throwing were not up to acceptable standards, especially at the Torremolinos venue. Implements provides were old and sometimes illegal (frayed grips on javelins).

15. Throwing circles were poor, especially at Torremolinos, where the weight circle was an indoor one, needing different shoes. No water available, the competition took a ridiculous 5.5 hours, the weights were terrible, jury rigged with galvanised wire. When spectating, hard concrete steps, little shade, and nothing to see from lunch time to 4pm.

16. No proper implement to train with, no accommodation for practice before event. No good enough javelin for proper distance. Just a 55m only. A bent javelin in competition for throws. Each athlete waiting to throw the one good one.

17. It was appalling to find that with nearly 40 entries in my events, only 8 people got more than 3 throws. There should have been a properly seeded pool system with 16 to the final when numbers exceed 30. In the final each athlete gets 3 throws, then the best 8 at that point get a further 3 throws (making 9 throws in all for the best 8). The reference above to the IAAF rule is incorrect – qualification rounds must be used when the number of athletes is large. AT LEAST 12 then qualify for the final. (Larger numbers of competitors require larger numbers to the final)

My suggestion for better turnout: Next time, email surveys to athletes.

Be the first to comment on "Few respond to WMA survey on Malaga worlds, but feedback is still eye-opening"