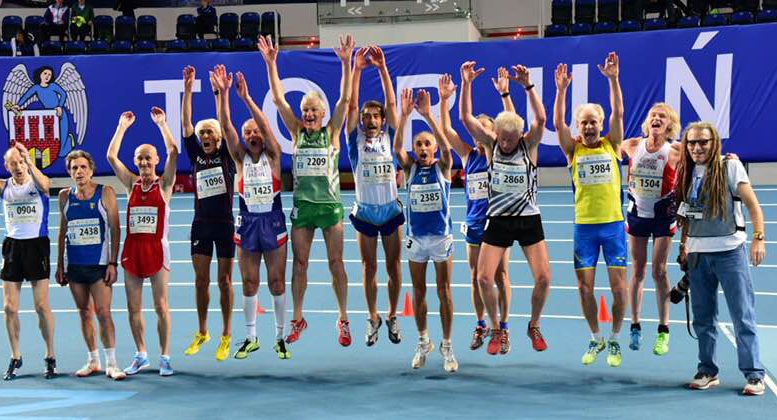 Despite the USATF misreading of the Torun medals table (Yanks were fourth, not second in overall medals at worlds), it appears Team USA was ounce-for-ounce the best squad in Poland.

“The main goal was to win the most overall medals which, this time, proved to be quite impossible with the home team Poland, and the next door country Germany having over four and nearly three times as many athletes entered as we,” said national masters chair Rex Harvey. “However, Team USATF-Masters did win more gold medals than anyone but Germany in the most successful WMA Indoor Championship ever. We couldn’t ask for more team spirit, cooperation and effort.”

He said read the results. I relied on a summary of who won medals.

Charles Allie (M70, Pittsburgh, PA) won four medals, all of them gold, including world records in the 200m and 4x200m relay.

Emma McGowan (W50, Sugar Hill, GA), won four medals, all of them gold, including an American record in the 4x200m relay.

And Thomas Jones (W65, Glenn Dale, MD) won three medals, all of them gold, including as a member of the world record setting M65 4x200m relay team.

“I am incredibly proud of our athletes and what they accomplished here,” Rex told USATF. “I am even prouder that they honorably represented our country in the spirit of sportsmanship and friendly, if spirited, competition, with a total absence of chauvinism and gloating. They supported each other in many ways, most obviously with their presence in the stands cheering their teammates on throughout the entire meet. They did themselves and all of us proud!”

USATF also said: “This was by far the best showing by a US masters team at a WMA indoor or outdoor championships outside North America. Fifty-six members of the team benefited from the World #1 Program designed to help get top performing athletes to the championships, and 52 of them brought home medals; three others were injured before completing their events.”

In January, Rex said: “We anticipate a sizable increase in the number of medals as we have the talent. We just need to get them here. The goal is to put us in the top three countries for the first time for an indoor world championship meet in Europe.”

I also was blown away by the share of world records set by Americans — 10 WRs compared with 36 overall. (See list here.)

Methinks USATF in future world meets should give either a WR or AR bonus or allow record-setters to max out their $1,000 immediately. In other words, one WR has to be better than a bunch of golds far below WR standards.

I asked Rex what changes might be in store Toronto 2020.

He replied: “We will have to carefully analyze the results before we can start thinking about any future programs and how they might be handled differently.”

In any case, media coverage (including web streaming and YouTube posting) of all sessions was awesome, and photographers Rob Jerome (America), Doug “Shaggy” Smith (Canada) and Alex Rotas (Britain) were all over the place, posting a zillion shots to Facebook.