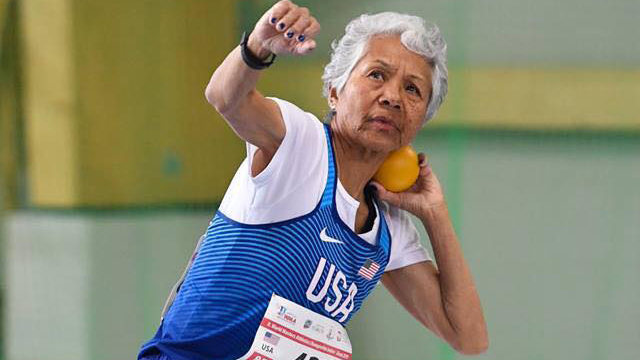 Irene Obera, shown in a majestic Torun pose by Rob Jerome, could threaten a half-dozen world records outdoors in 2019.

For at least the third time since 2014, Hall of Famer Irene Obera has been named USATF Athlete of the Week. The latest honor was announced Wednesday. This removes the egregious stain on her rep at Torun worlds, when she was the lone entrant in the W85 high jump, passed at .80 meters (2-7 1/2) and then had three misses at .83 (2-8 3/4). NM by her name. No gold. But I guess I’ll have to forgive her, since she set three world records in Poland.

Of course, Irene is a former WMA Athlete of the Year and also won USATF Masters AoY honors a couple times.

So it’s ironic that Irene has mulled hanging up her spikes at least twice — as I wrote five years ago.

Her W85 season now moves outdoors, where the listed WRs are:

How incredible will Irene be in 2019? You tell me.