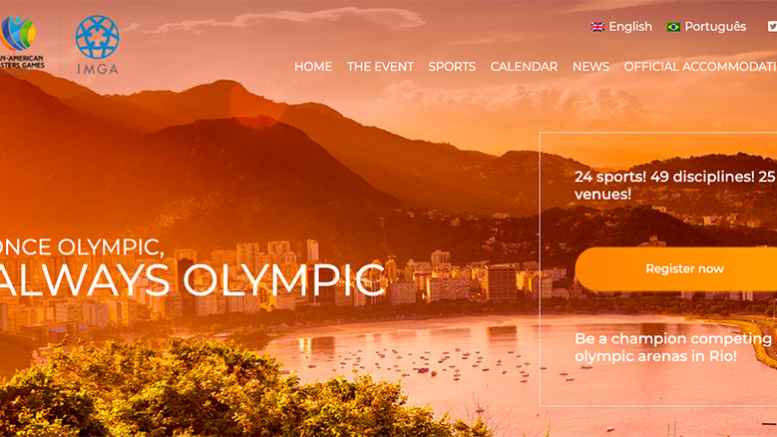 Masters athletes with a taste for danger are in luck! They can still compete on a world stage this year — at the Pan-American Masters Games in Rio de Janeiro. The track meet is Sept. 4-13 at the University of the Air Force in Rio (Universidade da Força Aérea). And the price for joining “between 10 and 20 thousand sportspeople” in “24 sports! 49 disciplines! 25 venues!”?

“The registration fee is US$ 205, for foreigners. Each registration gives the participant the right to take part in two sports and five competitions in each one of them,” says the site, which last mentioned the C-word on March 13.

Take a second to recover from laughter. It gets better.

The FAQ poses the question: “In addition to the competitions, will there be social events in the city?”

“Yes, participants and the public will have the opportunity to enjoy the best of Rio de Janeiro,” says the LOC. “Every day, after the competitions, there will be Masters Fests in two parts of the city. These are social events to celebrate the sports spirit, to eat, drink and dance with live Brazilian and international music.”

Perhaps event organizers are counting on the Northern Hemisphere conquering COVID-19 before September. But chances are Brazilian politics are playing a part in the happy talk.

There’s been a furious reaction in Brazil after President Jair Bolsonaro demanded an end to lockdowns imposed in his country’s biggest cities in an effort to slow the spread of the coronavirus.

Having played down the virus for days as “exaggerated,” the president doubled down Wednesday, labeling governors and mayors who have imposed restrictions as “criminals” who are “destroying Brazil.”

Bolsonaro’s position has brought him into direct conflict with a broad spectrum of medical professionals, scientists and regional leaders who have been appealing to Brazilians to remain indoors.

Governors and mayors have brought the cities of São Paulo and Rio de Janeiro to a near-standstill, closing down non-essential businesses and most transport links. Brazil, Latin America’s largest nation, has 2433 confirmed cases with 57 deaths.

“Other viruses have killed many more than this one and there wasn’t all this commotion,” Bolsonaro complained to journalists Wednesday, adding: “If we don’t get back to work, Brazil could depart from democratic normalcy.”

On Tuesday, he made an impassioned nationwide TV address in which he called the closures a “scorched earth policy” and declared that “jobs must be “protected.” He warned against hysteria and panic measures, and questioned the need for schools to shut down.

OK, back to the reality-based world.

I wrote Doug “Shaggy” Smith, the M65 steepler and photographer who was hoping to cap his stellar meet-director career with a wildly successful WMA world meet in Toronto this summer.

Doug, who was chairman of the LOC, shared a timeline for the decision to shut down worlds. He wrote:

In retrospect, circumstances changed so quickly that it was only three weeks from a formal LOC meeting to our decision to cancel.

We even hosted a WMA technical visit. Two weeks ago, we had our formal media announcement on top of the CN Tower.

March 8th, we held our 50th Ontario Masters Indoor Championships – which might have been the last meet in North America. Of course, when Baton Rouge and then Saint John cancelled their nationals, the local scene was impacted.

We held frequent executive meetings as the pandemic worsened around the world. We adjusted the budget for far less entries – to see if the meet was still viable.

When the IOC announced they had four weeks to decide on a postponement, we thought we had a somewhat similar timeline. And then a few days ago, it looked like they were going to postpone shortly.

When they did postpone, we had an emergency meeting and pulled the plug. It took us an agonizing day to draft the announcement, get it translated, consult with out LOC and consult with the WMA. All parties were in agreement.

Five years of work down the tubes!

Wanting to put a positive spin on things, I wrote him hopefully: “Keep us apprised on any new dates.”

Shaggy replied: “Not being optimistic about moving to next year. All of the [WMA] regions have their championships – NCCMA in Spokane, World Masters Indoors in Edmonton, and the World Masters Games in Kansai,” referring to the region of southern Japan expected to draw tens of thousands. (I wasn’t aware of Spokane hosting regional WMA meet in 2021, BTW.)

But early today, the International Masters Games Association (which oversees World Masters Games) hinted that the Kansai event may be in danger.

At the moment, we have to wait until the IOC has decided when the Olympics will take place in 2021.
Only then, we will be able to determine if/how the WMG 2021 in Kansai are affected.

We will share any updates as soon as possible. (2/2)

The delay of Tokyo 2020 is having a similar domino effect on 2021, bumping the World Athletics (formerly IAAF) Outdoor Championships in Eugene to who knows when. But unlike to 2020 Olympics (which will still be called 2020 even if it’s held in 2021), 2020 Toronto worlds isn’t seen in the same Big Dog light. Other meets won’t just step aside.

I’ve canceled our flight to Portland for the June Olympic Trials (wife and I hoped to cover the Eugene meet for Times of San Diego) and got money refunded for AirBNB lodging in nearby Springfield. I got a refund for my Toronto AirBNB room, too. But I’m keeping my flight to Detroit, since I can spend time with my 91-year-old dad in a nearby suburb.

My life is pretty much homebound now (and so should yours). This bug is sneaky, and I’d rather lose fitness (such as it isn’t) than go out. (But I’m taking walks with wife in the neighborhood.)

On Facebook, tons of masters are sharing workout work-arounds. I salute them. Shows how tough, disciplined and smart we are. (I’ve even gotten a TRX system for upper body work.)

1 Comment on "Pan-American Masters Games in Rio unfazed by virus news, still on track for September"