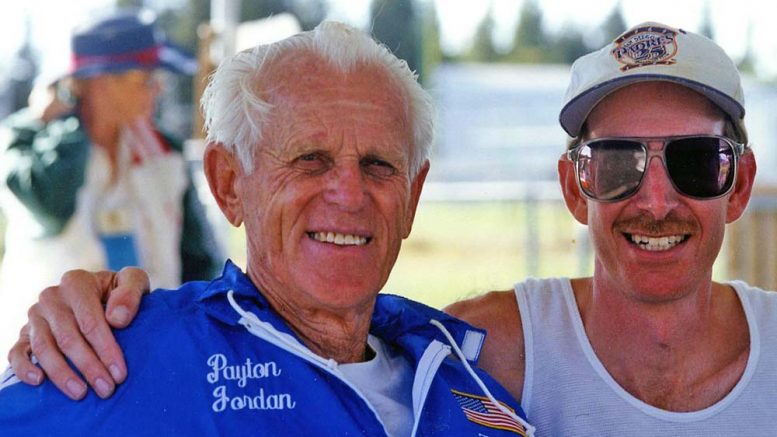 Me with Payton Jordan at 1997 San Jose nationals when he set M80 world sprint records. See his marks.

WMA has awarded 2021 outdoor worlds to Tampere, Finland, and delayed other world meets down the line. The scrambled calendar has led to much gnashing of teeth and griping about meet conflicts and other inconveniences. Others cheer the changes.

Don’t count on ANY major international masters meets going off as scheduled. Not in 2021, 2022 or even 2023. As I’ve noted in social media, until we have herd immunity globally via a widely used and effective vaccine, ain’t nobody going nowhere. (And who wants to run timed finals at 100m using only lanes 1, 5 and 9?)

Sure, domestic meets might return in 2021, but even those could be risky. Will America be at the back of the line for COVID-19 shots if Europe or Asia finds the cure first? Politics aside, nobody can guarantee that it’ll be safe to play for years.

Such a shame. Despite virtual meets (like one in Europe where masters compared 5K times), such efforts are pathetic substitutes. The charm of masters track is its family feel. Every major meet is a reunion of the tribes and old friends. Many of us look forward to hanging out with longtime rivals (or, in my case, betters). I especially like comparing notes with fellow photogs. Something I can do without getting DQ’d.

So don’t count on a return to WMA normalcy for years.

But think of the potential for growth of our niche sport. How many people will join our ranks for the sake of exploring their quiescent talent or making up for lost time? Maybe even Merlene Ottey will make a W60 comeback.

We all are Payton Jordan in that sense. Let me explain.

When the former Stanford and U.S. Olympic coach died in 2009 at age 91, I wrote how Payton had become a masters sprint legend, with world records that still awe.

I speculated that the reason he became a masters superstar was because he was robbed of Olympic glory in 1940 and 1944, when some dipshits started a war. Payton had set a 4×100 world record with USC in the late 1930s and would have been a medal favorite at Tokyo 1940 or London 1944. (Coincidentally, the Tokyo Games were at first reset for Helsinki, Finland, in 1940 before being totally spiked.)

So what if a new generation of Payton Jordans takes a whack at masters track in decades to come as a result of losing their prime years now?

One wrinkle to that theory was well-articulated by Dave Marovich, 76, of Philadelphia Masters in a moving column near Penn Relays time. Dave told columnist Bob Ford: “It’s a downer. You see that seniors in high school and college have lost their seasons, but they’ve got their whole lives ahead of them. We don’t have as many years to recover. It’s tough for them, but losing a season for us is big. How many more do we have?”

Bob interviewed all four members of the previous year’s lone M75 4×400 team at Penn. He finished his column thusly:

“Safely on the infield, the four members of the team gathered as one in the slanting light and lengthening shadows. They had won their race because they ran it and finished it. The running was the victory, because the next race is never guaranteed to arrive. We all know that now. They knew it then.”

We all know this virus is a booger we’ve never seen before. I’m not giving up hope for a season before I turn M70 in 2024. But let’s be real. Track won’t be back until The Beast is toast.

So until we meet again: Stay safe out there. Payton is watching.

8 Comments on "Don’t count on any WMA world meets until 2024, or when The Beast is busted"