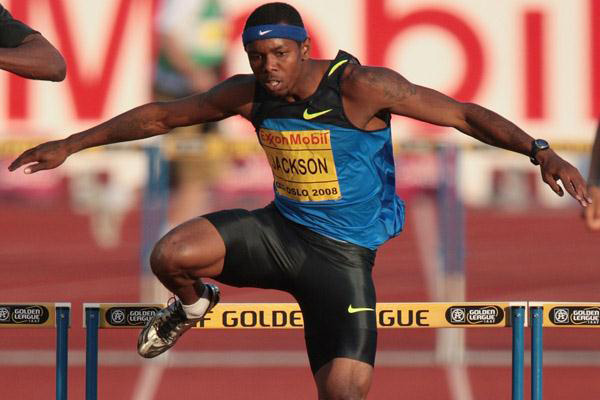 Bershawn Jackson may be (at 5-8) the shortest world-class long hurdler. Photo via IAAF

TV likes to call Bershawn Jackson “Batman.” Today we call him Birthday Boy. The 2008 Olympic bronze medalist in the 400 hurdles is 35. And despite his April 2017 announcement that he was retiring, he’s already competed at least five times this season. His most recent mark was a second-place finish Friday at the IAAF Diamond League meet in Doha, Qatar. He clocked 49.08, which isn’t far off the listed M35 American record of 48.93 by Nat Page in 1992. He’s not likely to challenge the listed WR of 48.13 by Jamaica’s Danny McFarlane in 2009. (The last time he was that fast was 2015, when Bershawn ran 48.09 at Doha.) But financial incentives could help him go faster in this non-Olympic and non-IAAF world meet year. He’s won four world titles (three in 4×4 relays), so maybe he’ll keep on trackin’ till 2019 worlds — also in Doha. This means he’ll have to qualify, of course. But Batman — with a PR of 47.30 — has a way of surprising you. His next shot is later this month at Rome Diamond League. Go get ’em, BJ!

Be the first to comment on "Bershawn Jackson turns 35, threatens American record in 400 hurdles"