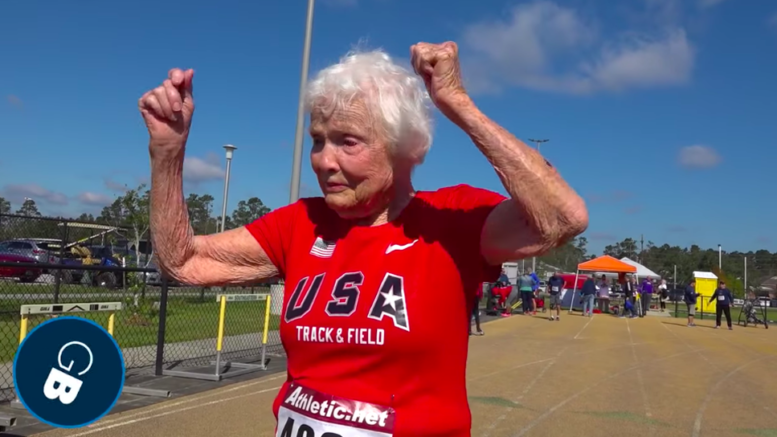 Julia Hawkins ran 100 meters in 62.95 seconds for the first women's mark in the W105 age group. Image via YouTube.com

One month ago — Nov. 6 — Julia Hawkins of Baton Rouge scooted 100 meters at the Louisiana Senior Games at Southeastern Louisiana University. Her time — just under 63 seconds — wasn’t as important as her being the first woman (and only third human) to compete in track and field at age 105. She drew global fame, thanks to massive publicity from the National Senior Games Association before and after the meet.

Over the weekend, the USATF Masters Track & Field Committee, convened at the Orlando annual meeting, ratified the mark as an American record, with world record status pending.

Case closed? Not quite.

As I reported Nov. 17 on Times of San Diego, the officiating at Julia’s meet was sketchy. The meet was USATF-sanctioned, of course, but the first results didn’t have exact times. Masters records czar David Bickel noted on the official application status page that he lacked a zero-control gun test photo as mandated on the record application. I also learned: A set of “ALL results” lacked wind readings, and the original results also showed Julia as having long jumped 8 feet 2 inches.

On Nov. 18, Dave Svoboda of official timer Chipped Timing said the zero-control test was “administered prior to competition and witnessed by multiple officials. The printouts/forms were submitted to the meet officials. I was asked for some additional documentation; that has been submitted. To the best of my knowledge, everything is complete.” He also told me: “On the long jump, this most likely is a clerical error. Thank you for bringing it to my attention, I am checking into it with the officials.”

But I wasn’t satisfied. I began asking around for the record application — shooting email to NSGA, the Louisiana Senior Games and officials of the USATF Southern Association. Radio silence.

About two days after I began making noise, the Julia Hawkins record status changed to “approved.”

At that point, I got noisier — asking everyone from USATF President Vin Lananna and Gloria Louis — the head official in the region — to the timing committee and national masters chairman Jerry Bookin-Weiner for complete record documentation of ‘Hurricane’ Hawkins’ mark.

The result: crickets. (Except Vin, who wrote me Nov. 20: “I spoke to Jerry today and he suggested that you check out this link. He indicated that the record should be valid. Hope that this helps.” Not really.)

Thinking that privacy might be at issue, I texted Julia’s daughter Margaret, asking if her mom would object to release of the records paperwork if I promised to redact any personal info. Margaret responded a week ago: “She is depending on Del (Moon) to guide her. Hope to hear soon.”

Del is chief spokesman for the National Senior Games Association. I sent the same query to him — offering to leave out private info on Julia. On Nov. 29, he replied: “As I noted in my earlier response, this event was organized by the Louisiana Senior Games, so your request should be directed to them. I was brought in to handle media relations at request of the Hawkins family and LSGA, and our staff pointed LSGA in the right direction for technical info. That’s the extent of NSGA’s direct involvement in the event.”

So no answer on family permission, I gather.

I got no replies from top local official Gloria (winner of a 2020 USATF President Award, BTW) nor Jerry the masters chair (except for his demand earlier that Times retract my headline on the Hawkins story, suggesting fears that she was robbed of a record.)

Chair of @USAMastersTrack is demanding a retraction for headline I wrote for my @TimesofSanDiego story on #JuliaHawkins WR snafu story (which merely suggests fears, not fact). But @USATF and Senior Games folks have dragged feet. Show me record paperwork! @nsga @letsrun @tandfn pic.twitter.com/ytWzgPBK7x

At Orlando’s annual meeting Saturday, where a committee met on masters track records, longtime masters Executive Committee member Bob Weiner, our marketing meister for decades, submitted a question before the final vote to ratify more than 170 Americans age-group records. Bob asked: “To clear the air, can someone explain the status and the [unresolved] questions about Julia Hawkins’ 105-year-old record?” Bob told me that Sandy Pashkin moved and Bill Murray seconded approval of the list, “and no one answered my question … even though it was raised timely. The list was approved and ratified without opposition.”

Why is this so hard?

No doubt she ran it — as millions of viewers can attest. But did officials and the timing company meet all masters records requirements? Did she jump through the same hoops as all other applicants?

This should be a slam dunk. Release the paperwork and tell ol’ Ken Stone to shove it where the sun don’t shine. But lips are sealed from here to eternity. Why?

I can only speculate:

1. Revealing paperwork would set a precedent for demands about other records (and shatter a USATF culture of secrecy.)

3. Most likely: Revealing paperwork would show something amiss — and embarrass the NSGA, USATF and others. (Chaos would ensue, all thanks to what a friend of mine called a “made-for-TV event.”)

Over the weekend, Jerry Bookin-Weiner was inducted into the USATF Masters Hall of Fame. (Mazel tov! His decades advocating for fellow throwers merit recognition.) But lest he join my personal Hall of Shame, I hope he can grant the release of the Julia docs.

Or explain why he can’t.

2 Comments on "Was Julia Hawkins’ W105 record for 100 railroaded to ratification? Crickets on concerns"