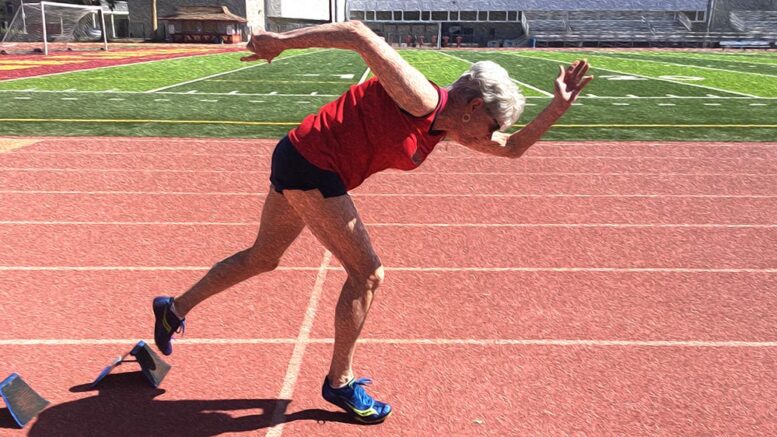 Kathy Bergen keeps her head down and eyes up for a 2022 that could include more world titles. Photo via Bergens

Depending on your view, Kathy Bergen chose the exact right or wrong time to turn 80. It was December 2019, when only a few had heard of COVID-19.

But while some elite masters hunkered down and bloated up, Kathy kept on trackin’ — her eyes on the record-setting prize. She’s a legend of age-group sprinting and high jumping — inducted into the USATF Masters Hall of Fame in 2008 and named USATF Masters Female Athlete of the Year in 2015.

How about another AOY?

“I am absolutely thrilled to receive this award,” Kathy told me shortly after the AOY announcement in October.  “Since I aged up in December 2019 I have been working very hard to set these records.”

As always, she credits her hubby Bert, also an accomplished jumper. “Bert managed to find an indoor meet last year — Southwest Region Masters Championships — at the University of Houston right before everything got shut down,” she said. “Then he found an outdoor meet in October — Texas vs. World in Marble Falls, Texas  So I was able to break three indoor WRs and two outdoor WRs.  (Houston indoor 60 in 10.02 seconds, 200 in 35.66 and high jump 1.20.  Marble Falls outdoor 100 in 16.62 and high jump 1.15.)

The Bergens, she said, were lucky to attend six meets — four in SoCal and two major USATF meets — outdoor nationals in Ames and Mid America Championships in Fort Collins, Colorado.

She credits Eric a lot, though.

“He completely changed my workouts to allow for more rest, and he devised workouts depending on the time year and upcoming meets,” she said. “He is one of the reasons that I have had so much success. My club, Southern California Striders, provides a lot of competition and support in all the local meets.”

Bert and Kathy, of the La Canada Flintridge suburb of Los Angeles, considered themselves lucky for having had access to a local track, high jump pit and jump runway where they coach the high jumpers.

“So we were only away from the track for about two months” during the pandemic year. “Then I worked out three days a week as usual. The gym opened up in June so everything was back to normal.”

Besides, in 2020, Kathy says she had runner’s knee, which “required a bit of physical therapy.  This year. I didn’t do anything silly so I didn’t have to see my therapist of 22 years.”

Kathy recalls that her 2015 AOY was a shared one — with Irene Opera after Lyon worlds amazements.

This coming season, Kathy is considering dropping an event or two. She says: “It is really exhausting to do six events in one day. However, I will probably change my mind. I always try to improve, but it is important to maintain where I am now.”

(Indeed, Kathy told GeezerJock newsletter maven Ray Glier: “Kathy Bergen would rather kiss a hot iron, or stare at the sun, than lose in track & field.”)

I asked my usually shameless question.

Kathy graciously replied: “I probably won’t retire because I am healthy, thank God, and I love it so much.”

Be the first to comment on "Kathy Bergen bulldozes through pandemic with latest AOY award, plans winning 2022"