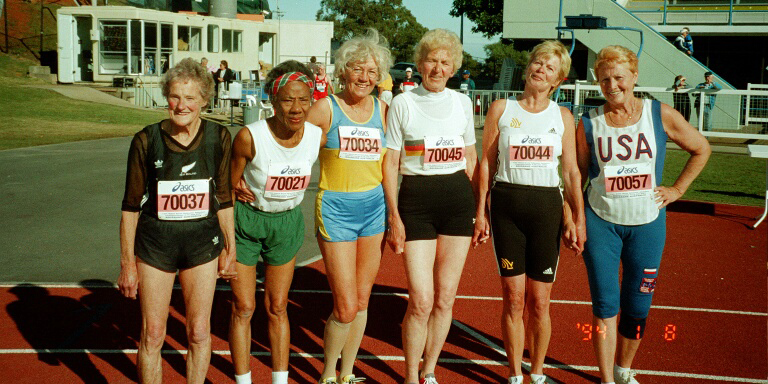 Magdalena Kuehne worked for decades in the garment industry and as a costumer, dressing stars at Universal Studios, NBC and Warner Bros. She worked on the TV shows “Growing Pains,” “West Wing” and “Friends” and movies including “Smokey and the Bandit,” “Continental Divide” and “Best Little Whorehouse In Texas.”

But her Southern California Striders family and friends around the world know Magdalena for wearing Team USA colors as a Masters Hall of Famer, with hundreds of great marks in sprints, throws and especially the triple jump. Magdalena, standing in front of Bogie and Bacall, worked as a Hollywood costumer.

Her daughter, Karen, reports that Magdalena died in a hospital May 17 — six days after suffering a stroke. She was 88.

Funeral services are set for Tuesday, May 28, at Holy Cross Cemetery, beginning with a Mass at 11 a.m. at Holy Cross Mortuary Chapel on the first floor, 5835 W. Slauson Ave. in the L.A. suburb of Culver City. Reception follows at the Courtyard by Marriott, 6333 Bristol Parkway (three blocks from cemetery), Culver City. (Parking validated.)

Magdalena retired from Warner Bros. in 2004 at the age of 73. I found a reference to her in The Costumer 10 years later: “A retired Women’s Custom Made foreperson and a member since 1978, Magdalena supervised the Ladies Tailor shop at Warner Brothers for many years until her retirement in 2004. She was recently named to the USATF Masters Hall of Fame – Class of 2013. Magdalena is still competing at age 82 and has held many records in track and field.”

She apparently was a member of International Alliance of Theatrical Stage Employees Local 705, known as the Motion Picture Costumers.

Christel Donley, a relay teammate from the mid-1980s, says she was distraught to hear the news from Karen. “I couldn’t sleep last night,” she told me Saturday. “I was so shocked.”

She was born in March 1931 in Kruschiwl, Yugoslavia, and was a prisoner in her hometown after World War II, Karen said. But she escaped to Hungary and then Austria in 1946, where she learned the garment trade.

The Rev. Mathias Lani, founder of the St. Stephen Catholic Church in Los Angeles, arranged for her, along with others, to arrive in America (New Orleans) in 1952 via a military boat and then to Los Angeles by train. Father Lani presided at her marriage to her husband, Dieter, on Oct. 31, 1954. They had two children: Harry and Karen.

Karen says her mom started competing in track with the Senior Olympics in 1981 at the age of 50. She set a W60 world indoor record in the triple jump at 1994 Columbia, Missouri, nationals — going 25-9¼. She was inducted into the USATF Masters Hall of Fame in 2013.

Annelies Steekelenburg — a fellow javelin thrower — wrote: “She was such a beautiful person, inside and out. I will so miss talking to her at the meets.”

Three years ago, amid a rain-stormy-mud-slidy season, Magdalena was quoted in a local paper: “Despite a visit from Los Angeles Mayor Antonio Villaraigosa, homeowners remained in the Alpine Village area of Big Tujunga Canyon. Thirty-seven-year resident Magdalena Kuehne said she and her husband would leave ‘when rocks start rolling down this street. Now it’s only a little mud and water. That’s not too dangerous.'”

Given her wartime experience, a little rainstorm wasn’t going to faze her.

Magdalena was a fixture of SoCal masters meets. Her presence was a given. It won’t be the same without her. Magdalena took gold in the W75 javelin at 2008 Spokane nationals.

Dan Bulkley dies at 101; Masters Hall of Famer made mark in hurdles — and love of many sports