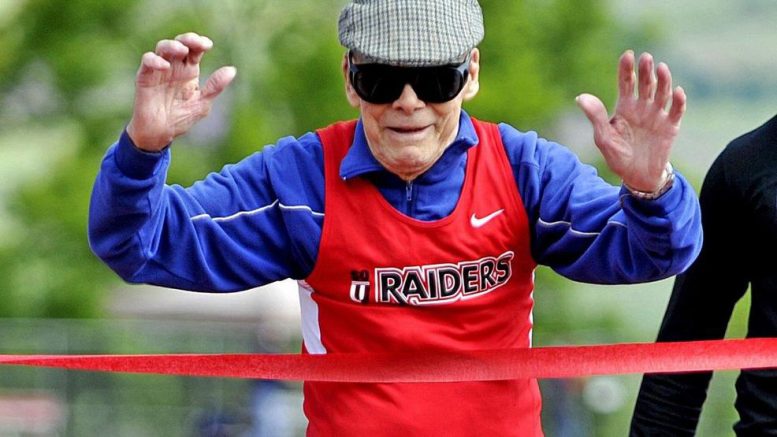 Dan Bulkley, near finish line of life, was all Southern Oregon University, where he coached. Ashland Daily Tidings photo

Dan Bulkley died a winner. Even better, he was a player — someone who competed in track (and other sports) just for the joy of it. As his local Oregon paper reported Monday: “Bulkley, a famous masters athlete and pioneer of [Southern Oregon University’s] physical education programs and Mt. Ashland Ski Area, died Sunday evening. The Phoenix resident was 101 and, said his daughter, Dani, of Bend, ‘His philosophy was that the less you do, the less you do — and the more you do, the more you do.’ His secret was to keep moving. He fractured his back a year ago, and he thought ‘Why am I here if I can’t do the things I love to do?’ He was basically done.”

His last major meet was the 2015 Huntsman World Masters Games in Utah.

On mastershistory.org, I found how National Masters News showed its awe.

In 2005, NMN editor Al Sheahen wrote about Dan at the sixth World Masters Games in Edmonton, Alberta: “Dan Bulkley, 88, Phoenix, Ore., was amazing. On Monday afternoon, he ran the 2000m steeplechase. The next morning, he won a singles match in badminton, then drove to the track in time to run the 300mH final. Then he took off to get ready for a badminton doubles match that afternoon.”

Suzy Hess Wojcik, former NMN publisher, wrote me: “We knew him as a wonderful and sweet athlete that just loved to compete and did so for a very long time. He always had a smile on his face.”

Pete Taylor, our legendary announcer, recalled Dan as “a wonderful guy who liked to go over barriers. That would include the high jump, straight hurdles, long hurdles and steeplechase. He was very popular at our meets. Oh, I am 99 percent sure that the correct pronunciation was Buckley despite the spelling of Bulkley.”

I wrote last year about a fantastic Tim Trower profile of Dan at 100:

He plans to run [100] again this Saturday, when a birthday party of some 200 guests — family and friends are another thing Bulkley has collected over these many years — commences at RoxyAnn Winery.”

Also notable: “The [alternating lead leg] hurdle technique he adopted years earlier in college boded well. For 15 years and through three age groups, 70 to 84, he was unbeaten in the intermediates.” (Using “intermediates” brands the writer as a track savvy guy.)

Also loved hearing Dan’s motto: “You don’t slow down because you’re getting old. You get old because you slow down.” Dan’s last official meet was a year ago in Bend, running the 50 and 100, the paper says.

He’s already a Masters Hall of Famer. Legend is his legacy.

Dan’s records have been surpassed. His legacy as a gamer never will.

Be the first to comment on "Dan Bulkley dies at 101; Masters Hall of Famer made mark in hurdles — and love of many sports"