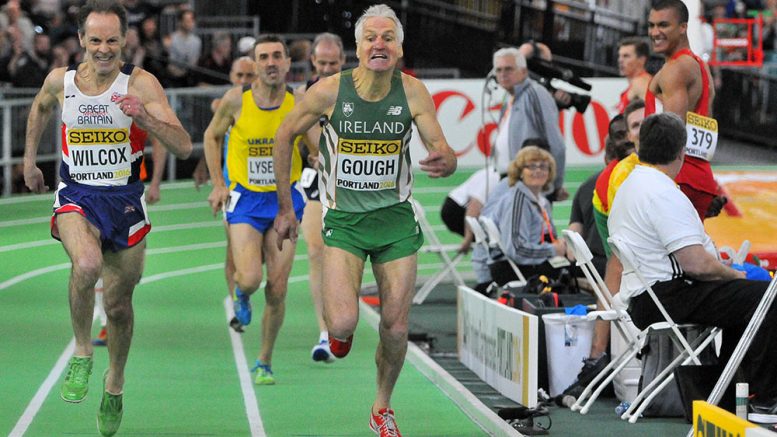 Joe Gough, wearing green, led in the last lap of 2016 IAAF Portland world exhibition 800 until falling in the final steps.

One of my pet projects has been advocating for masters exhibitions in the Olympics. I thought this was reasonable, since paralympic events like wheelchair races have been contested in the Summer Games. (At Los Angeles 1996, one male racer said to the crowd: “Will you love me if I lose?”)

Now I say the same. I lost.

A week ago, at the final press conference of the World Athletics Championships, I had a chance to quiz the top enchilada — Lord Sebastian Coe, president of WA — the former IAAF.

A week ago today, I took a microphone and reminded Seb that Beijing 2015 and Portland 2016 featured masters sprinters and middle-distance runners in exhibition races (with three of four won by British athletes).

I asked: “When will we next see masters exhibition races at worlds?” (The same question applied to the Olympics, since the IOC lets WA run that show.)

Seb’s actual answer: “Probably not. We looked at this. We looked at it operationally…. Masters has its own vehicles, a very successful one…. But as far as I’m concerned and the council is concerned, it’s really important that we hold to the format that we currently have.”

This came as a shock, since I’d been hopeful that masters jumper Willie Banks, a member of the WA Council, and USATF President Vin Lananna, who helped bring Oregon22 to Eugene, would be in our corner. In fact, Vin gave me hope when I spoke to him in 2017 and interviewed him earlier.

“Can you guarantee that 2021 IAAF worlds in Eugene will host masters exhibition events?” I wrote here. “He said yes without saying yes, noting how masters are embedded in lots of UofO meets. But he said the LOC has to be asked. So listen up, WMA. Start thinking about events at Hayward Field.”

And in November 2016, I had this exchange with presidential candidate Lananna:

Me: Successful masters exhibition events were held at the IAAF Beijing and Portland world meets. But London 2017 has said no, according to World Masters Athletics. Would you lend your voice to adding a masters male and female event to the London world meet? Would you support addition of masters track and field events to the Olympic athletics program, perhaps on a rest day? Would you commit to holding masters events at 2021 Eugene meet?

Lananna: We were proud to showcase athletes of all ages at the 2016 IAAF World Indoor Championships in Portland last March, which included youth and masters exhibition events. When given an opportunity to compete on a global stage, masters athletes can both inspire and motivate spectators. The more innovative we can be when developing athletics programs at all events, the greater chance we have of growing the sport. I would support adding masters exhibition events to the competition timetable at the 2021 IAAF World Championships.

I’m not giving up. And neither should World Masters Athletics, which theoretically has a seat at the WA table. Another WA Council may be friendlier to masters (aside from those over-35 elites competing for real money — there were many at Eugene, including Allyson Felix, Shelly-Ann Fraser-Pryce, Kara Winger and French vaulter Renaud Lavillenie).

During Oregon22 meet, many sessions had down time on the track. Such moments could have featured masters. Instead, we saw the antics of an athletically gifted event mascot called Legend the Bigfoot (who did acrobatics and held signs like “World record. Rinse. Repeat” and “World records are my favorite food.”)

I never saw Legend interviewed. But I doubt he’d have minded us geezers sharing the spotlight for a few minutes.