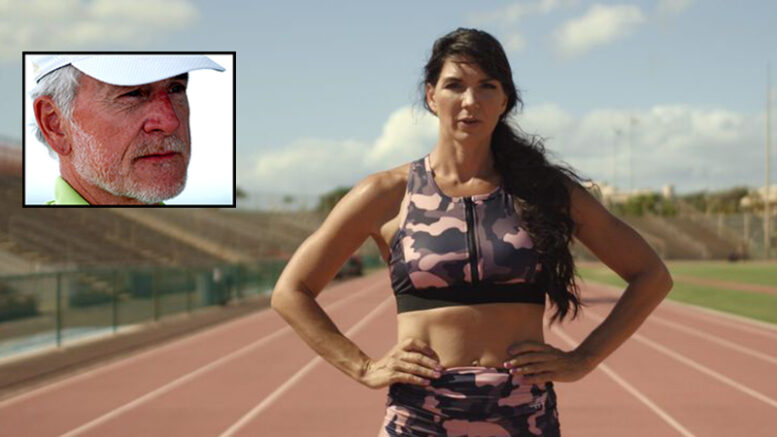 Cynthia — a Hawaiian coach, author and mother of three — became a headline in a culture war debate when she told of how a USATF official at Malaga warned her: “For your own safety, you should probably keep your mouth shut” about a rival sprinter who was a transgender woman.

I’ve written sympathetically about a transgender politician (a Republican gun-rights defender), runner (Joanna Harper, a scientist with expert credentials on transgender studies) and racewalker (a trans man at the Olympic trials). I even spent a memorable hour with a trans woman at 2002 Orono masters nationals (she beat my wife in the 200 but took sixth in the W45 race.)

But what really gets up my nose (as the Brits say) is hearing someone being told to shut their trap. So I wrote USATF, including our national masters chair, Jerry Bookin-Weiner, for comment. I wrote to Malaga team manager Phil Greenwald. Crickets from all.

Not Cynthia. In response to a series of questions, the sprinter with Navajo, Apache and German DNA shared details of the Malaga incident — and revealed who warned her not to speak up.

“It was Rex Harvey who said that to me,” she said Sunday via email.

Greenwald didn’t get off the hook, though.

“I would say I was not received warmly by Phil after complaining” about Colombia’s Yanelle Del Mar Zape. “I did also ask Phil and Sandy [Pashkin] about it at the meet and they said there was nothing that could be done. No complaint to be filed.”

Cynthia, who turns 46 late this month, said she doesn’t know if Rex was genuinely concerned that she might be attacked or not.

“He said it to me again on the phone a few months later, when he called to ask if I would please attend the Indoor World Championship to represent Team USA because he thought I could win medals. He was right of course.”

She says she spoke with Rex again at Poland worlds after Del Mar Zape beat Rachel Guest for silver in the 60 hurdles.

Congratulations to this #TrulyAmazing Delta Zeta alumna, Cynthia Monteleone (Xi Theta-UNCW), for becoming a World Champion in the 400m proudly representing the United States of America at the age of 40! #TrulyRemarkable @fastover40 @DeltaZeta_UNCW pic.twitter.com/FPtAbDEUgU

“Rex then spoke to Rachel and assured her he would ‘do something’ about the situation,” Cynthia says. “He then invited me to present at the annual meeting in Reno, Nevada, to tell my story. After hearing my story, the Executive Committee voted to establish a transgender issues task force to investigate the fairness of male-bodied athletes competing in the female category at masters championships.”

Colleen Barney was designated as head of the task force, and Cynthia sent research continuously to both her and Jerry.

Last month, she was told the task force had been disbanded in 2021.

“This was disappointing to say the least,” she said. “The IOC made it very clear that individual organizations should make their own policy. Did you know that male hearts get larger as we age while female hearts shrink? This is one of many specific considerations we should address when looking at fairness — especially in masters athletics.”

Extremely disappointed in USATF, Cynthia says she asked USATF Women’s Development Committee chair (and former masters 800 champion) Rose Monday at the Reno USATF convention if she could speak to the women’s committee.

Rose said no, Cynthia said, and added that Rose wanted her friend Doriane Coleman to speak on the issue as well but was told she was not permitted to have her speak.

“At this year’s meeting, I brought it up again in the women’s meeting in the Zoom chat,” Cynthia said. “Rose finally addressed the issue and allowed Nancy Hogshead-Makar, head of the women’s working policy group, to speak on the subject. Doriane is also a member of this policy group.”

Masterstrack.blog: What did (Rex) insinuate about your safety? What specific fear did he have, or suggest that you should have?

Cynthia: He said I should keep quiet — that I should not speak up about this, especially in a foreign country.

When was the first time you spoke about transgender issues publicly? After your daughter encountered the problem?

I spoke up immediately at the meet and continuously after, never fearing for my safety. The meet officials were very upset. They stopped the meet as we marched to the starting line. They then told me they could not do anything about it at this late hour, to address it with Team USA management.

(I started addressing it with Rex and Sandy at outdoor national meet BEFORE Malaga.) One European official, who was at the race starting line in Malaga, came to me in Poland and said they were all disappointed that no one had addressed this yet and to keep speaking up.

Has anyone within USATF spoken to you privately about your comments? If so, who? And what did they say?

No. At the masters Town Hall this past fall, I spoke up in the Zoom chat about how I went to the Capitol and spoke with senators and members of Congress about both this and as well the politics of how USATF has handled the pandemic (recently including hosting a championship in a place that practices discrimination against unvaccinated athletes). Vince Lananna sent me a private message asking him to email the details. I have emailed SEVERAL times with no response.

What are your plans this season? Going to New York indoor nationals or Finland worlds? What’s your current condition?

I would love to go to indoor nationals, but I choose not to take the vaccine. I have a religious exemption. Are you aware of what happened to Sonja Friend-Uhl after hers? [Editor: She’s hinted of adverse health effects on social media.] We cannot pretend there are no side effects medically as well.

I formed a petition (and also here) that got about 150 signatures asking USATF to move or cancel the meet since not all paying members could attend. Jerry Bookin-Weiner simply said — at the Town Hall — no, we are not moving it. I sent the petition and several emails still asking both him and Lananna with no response.

My running condition? I am running faster than ever, setting a masters PR in my 200m last summer. I would love to represent Team USA in Finland. However, if I am forced to compete against a male-bodied athlete again, I will not do it. I will walk away.

Me again: Cynthia’s politics aren’t mine. (But neither were Rex’s — a hard-core Republican I admired and got along great with.) Yet I condemn any effort to shush her. USATF must let her speak.