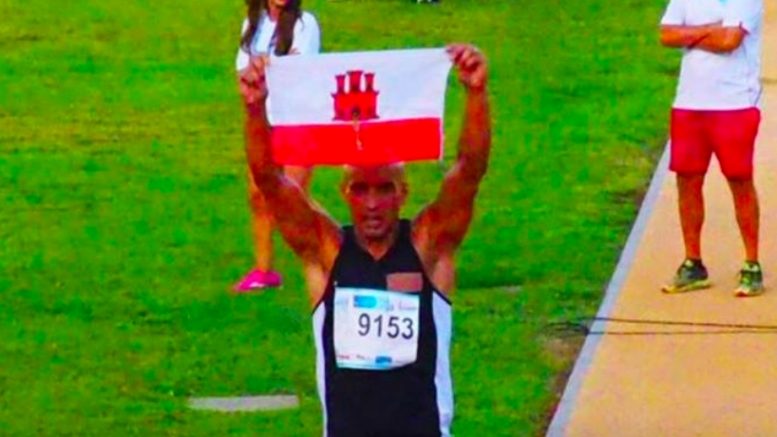 Liam Byrne pulled a Mexico City at Malaga, risking being kicked out of the meet for showing Gibraltar flag banned by Spain.

Liam Byrne took fourth in Heat 5 of the M40 800 prelims Sunday at Malaga, but he quickly became the focus of world media when he displayed his flag after the race. The flag of Gibraltar. In the results, he’s listed as representing “WMA.” Media reports say he was forced to run as a “neutral” athlete. Liam apparently gets a tongue-lashing from meet officials after showing his national flag.

His time of 2:03.49 (see results here) means he’ll likely have a hard time making the final. (Top qualifier was 1:58.08 by Kenya’s Isaac Kiberenge.) But he’s apparently the only Gibraltar athlete (of five originally entered) still competing in Malaga.

Would love to see him show up for Monday’s semifinals wearing a Gibraltar kit — and watching WMA officials go crazytown trying to deal with a “situation.” (He’s currently set for Lane 1 of Heat 1 in the semifinal at 7:15 p.m. Spain time.)

World Masters Athletics should assert whatever authority it has and veto the LOC. If not, Malaga will become known as WMA’s “Nazi Olympics.”

Here’s what the Express wrote in the UK:

‘We will NOT be bullied!’ Gibraltar athlete DEFIES petty Spain ban on displaying own flag

AN ATHLETE from Gibraltar who proudly flew the British territory’s flag at a competition in Spain has been threatened with disqualification after the Spanish government demanded competitors from the Rock compete under “neutral” colours. Spanish authorities had previously told event organisers athletes from Gibraltar were banned from displaying the flag because Madrid does not recognise the British territory as a separate country.

Following the decision, four out of the five-strong team from Gibraltar decided to boycott the competition despite months of training and preparation.

But Mr Byrne vowed to compete regardless, saying he would not be “bullied into making decisions that go against your own principles”.

His fourth-place finish today means he has qualified for the semi-final tomorrow.

But WMA officials are reportedly considering disqualifying Mr Byrne for defying the ban.

The Spanish Athletics Federation had previously threatened to shut down the entire event down if athletes from the Rock displayed the Gibraltarian flag.

A local athlete who was banned from representing Gibraltar in the World Master Athletics championships in Malaga this weekend, staged a protest by unfurling a Gibraltar flag at the end of his race, having run in “neutral” colours till that point.

Liam Byrne was the only one of five athletes banned from representing Gibraltar who decided to compete instead of boycott, after receiving a letter from the WMA claiming the instruction came from the Spanish government. Mr Byrne’s protest means he may be disqualified, despite having come fourth in the race and qualifying for Monday’s semifinal.