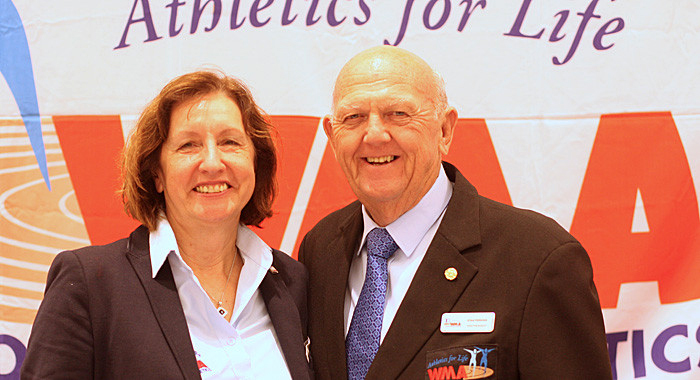 Margit Jungmann succeeded Stan Perkins as WMA prez (in my vernacular), but with a true electoral mandate.

Margit Jungmann of Germany, a former high school teacher and coach, schooled her competition Saturday and easily won election to the presidency of World Masters Athletics, becoming the first woman in that role in the body’s 43-year history. Margit won 110 votes — ahead of American Gary Snyder’s 12 and Finland’s Vesa Lappalainen with 19. (Corrected vote from original post.)

The former WMA Vice President succeeds Australia’s Stan Perkins, who must be envious (since he won his first election by one vote, albeit under fraudulent circumstances.)

The German masters website says she had given up her position as chairperson of the Federal Senior Citizens Association of the German Athletics Federation on Aug. 31 “for reasons of time.”

The result surprised moi, but not my unscientific-as-hell poll, which last month picked her as well — giving Margit 105 votes (66.5 percent) over Vesa (23) and Gary (22). So maybe (even with a mainly U.S. audience) this blog has some predictive powers.

Her election was hailed worldwide.

Now we get to see if she delivers on her campaign promises, especially transparent finances.

Regarding the other athletes who would be also interested in the WMA management, I am thinking about how to give them a right to know about the WMA finances. I intend to discuss this question within the new council.

One possibility could be to re-activate the release of financial statements on our WMA website. As they have not been released since 2010, it could be a good way to give the athletes, and everyone, access to financial information.

She’s a hard-liner on doping and wants to upgrade the WMA website, even talking to John Seto about a bigger presence of his mastersrankings.com. Hope to learn more about that soon.