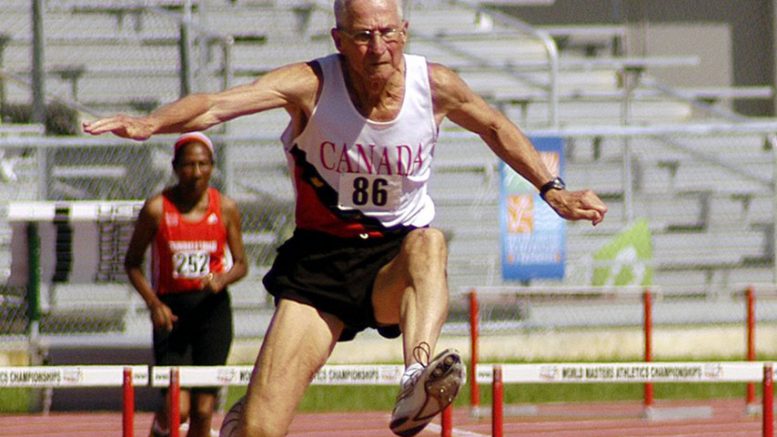 M85 legend Earl Fee overcomes all kind of hurdles, including a botched surgery. Earl in one of his 800-meter world records.

Our Ontario friend Earl Fee — the scholar and poet with countless world titles and dozens of world records — will compete at Malaga worlds this fall at 89. He’ll be the favorite to win most events he enters, usually including hurdles, sprints and perhaps the 800. But even Earl has challenges (besides age). He described his latest in a scary Facebook post eight days ago. He told of a cataract operation gone horribly wrong — “two dropped items at bottom inside [of] my eye — a very rare problem.” He says: an “urgent second operation two days later to remedy the problem was essential. I spare you the gory details. I look on the bright side; I had the top eye surgeon at the large Saint Michael’s hospital in Toronto, on short notice. And the operation was done quickly.” He doesn’t say what the items were, but thankfully he’s on the mend. Monday he told me: “Recovery is slow but seeing better in the operated eye.” Earl is in shape, citing an indoor 400 in March that age-graded at 107.5 percent for age 88. He says: “I can get [my fitness] back in a couple of months.” Also coming in a few months: “My memoirs, ‘Earl Fee Is Running’ will be out in Canada.” Can’t wait.