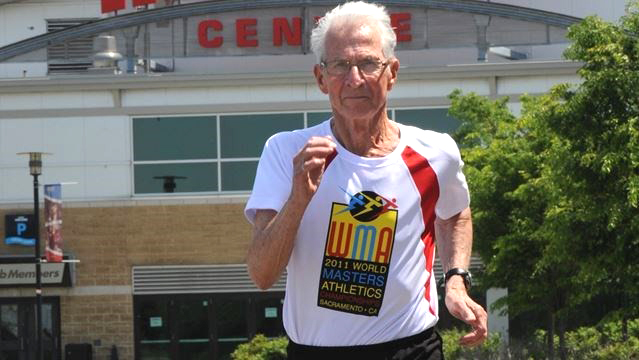 On Facebook, Earl said: “Had some good fortune today at the Ontario Masters Championships at Varsity Stadium today, lowering the outdoor world record 800m in age group 90-94 by over 4 seconds to 3:34.93– age graded 104.59%. The latter age graded is equivalent to about 5 seconds lower open record, they say. The high temperature 25 C (77F) didn’t bother me. My 800m recent training was based on a 3:36 pace. I have found I can achieve in a race very close to the pace I trained for, but the targets are reasonable. Two Canadian female athletes were telling me that I finished this race by walking across the finish line. Thank you. So I learned something valuable for 2 further meets this summer.”

Across the pond, Anne Gilshinan lowered her own recent W55 WR at 1500, clocking 4:41.46 Saturday at the Mary Peters track Saturday at the Belfast Irish Milers meet. (Results will be here eventually.) It’s her third WR this season. She also ran an 800 record a few weeks back. Among her cheering fans is former M55 mile WR man Rich Burns. (In 2010, Rich ran 4:36.94 to beat one of the oldest age-group world records on the books: 4:40.4 by Australia’s Jack Ryan in 1977.) In fact, he’s been advising Anne. Anne is frozen in time for her latest 1500 WR in this FAT photo.

Rich, who turns 65 in January and hopes to target some more records, says he started running with Anne, when he moved with his wife, Heather, to Ireland. “We became really good friends and battled through injuries and runs together,” he tells me. “After a while, I ended up advising her on her running. That’s about where it stands as of now though we’ve been back in the States for almost 1 1/2 years.” Rich says he writes to Anne almost daily and talk nearly weekly. “Anyway she’s doing wonderfully with her racing!”

Finally, another shout-out to Santa Monica’s Gunnar Linde, who claimed an M90 American record in the 1500. At the USATF Western Regional Masters Championships in Los Angeles, he ran 8:59.83 to beat the listed AR of 9:25.2 by Paul Spangler way back in 1989. (The listed WR is 7:37.08 by Toshio Kamehama of Japan.)

4 decades as friends and rivals: Aussie sprinters Kernaghan and Richards