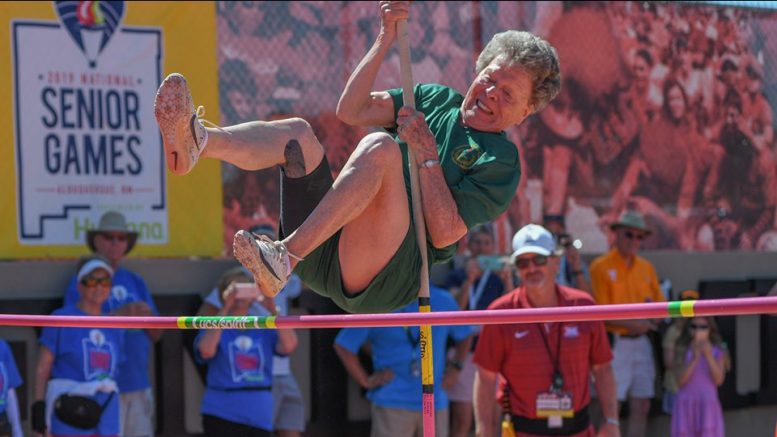 Flo Meiler set series of W85 vault world records (based on actual age), since she aged up before ABQ. Photo by Rob Jerome

As I’ve explained to newbies for decades, USATF (and World Masters Athletics) assigns your age group based on your actual age on the first day of a given meet. (This leads to some folks aging up in the middle of the meet but still competing in the younger age group.)

In the National Senior Games Association — including its biennial national meets such as ABQ — your age group is based on your age as of Dec. 31 in the year you’re competing. In other words, if you turn 60 on Dec. 30, you’re M60 or W60 for all those meets earlier in the year when you’re actually 59.

The NSGA age rules can lead to confusion when records are set. At ABQ, a slew of National Senior Games records were set. I don’t pay those much attention. But when sprinter Betty Schaefer turned 70 in ABQ, she jumped the gun in announcing an American 4×100 relay record. (See results here, BTW.)

She ran with Kathy, Brenda and Sandi Rue (73). But under USATF rules, only Kathy and Sandi were eligible for a W70-74 relay record.

That led Betty to post a follow-up: “Correction on our possible USATF 4 x 100M record A little sleuth work found that the USATF age specifications are different than NSGA for 70-74 age groups and we apparently missed the cutoff for 70 by several members of the team (by days) –Even though we had an 80-year-old ,they wouldn’t let us average our ages..LOL”

No harm, no foul. But supershooter Rob Jerome made the emperor-has-no-clothes observation: “Would be great if NSGA used the same age determination rules as USATF and WMA. For example, if you were 79 at the time of the Games but were turning 80 in 2019, your age for the Games was listed as 80. So there were instances where people set NSGA records for a particular age group but couldn’t set USATF or WMA records for the same age group because technically they had not reached that age group yet.”

Makes me think that NSGA, whose major meets are USATF-sanctioned (using USATF officials and following our rules), should change to USATF age assignment policies as well. Maybe in the olden days it was easier for Senior Olympic meet organizers to put everyone in a given age group based on their age at the end of the year. But modern software can calculate anyone’s age group based on Day 1 of the meet, and most athletes are used to this drill.

(Of course, a change to USATF rules would mean NSGA would have to throw out lots of its meet records. But what the hey. They shouldn’t conflict with USATF national records.)

After I wrote the above, email arrived from my fellow San Diego sprinter Dave DiMassa. He gave me permission to share his exchange with Rex Harvey, our national masters chair.

David wrote to Rex before the ABQ meet:

I am aware that USATF masters has had significantly less entrants vs. the Senior Games in recent years and I do see that trend continuing as, most older athletes want to compete with average to above average runners, not the same 4-8 “elite” names in each 5-year increment that have dominated USATF since the 90s.

I am not alone in these comments.

Thank you for your time

You certainly are entitled to your opinion and you certainly are free and able to enter, or not enter, any track meet. I will point out that it is utterly ridiculous for someone to win a 60 year race or set a 60 record when they are not yet 60.

For one thing the press lost a lot of respect for our Masters programs when they showed up to report on three 100-year-olds completing at the Cleveland Senior Games. They walked away in disgust when they found out that not one of them was 100.

They only were 100 by the illogical Senior Games rules. The origin of the end-of-year rule is way back when computer programs were not sophisticated enough to keep track of people’s ages. And youth sometimes use that rule because it keeps people from using their age to their advantage.

As you know, most youth get better as they get older. So an athlete that is 10 years old on Dec. 31 has to compete with other 10-year-olds all year. That is a one year disadvantage to that individual, but insures that he does not have an age advantage over their peers.

Masters are the exact opposite. They get worse with age. So a Masters athlete that is 60 on 31 Dec, gets to compete as a 60 year old all year giving them a (nearly) year advantage over other 60 year olds under the end-of-year rule. Not logical. And no matter what rule you use, someone is going to miss it by a few days, or even one day. USATF MTF will continue using actual ages on the first day of the meet as required by the World governing body WMA/IAAF.

I appreciate your response to my email. Respectfully, I am disappointed you chose not to address the main points of my message — the fact that the Senior Games is becoming a much more successful organization for the “average” masters track athlete to compete as well as hugely better attended and more fun.

Seeing the same “3-5 “athletes win in each age group for the last 25 years does nothing to encourage better attendance. Perhaps a “Hall of Fame” race and another heat(s) for the other 98%.

Clearly attendance and increasing venue locations and size of facilities in Senior Games within the last 10 years back up my statement. Again, you miss my point that allowing athletes to compete in the age they will be at December 31, not their actual birth date, promotes more participation in the games.

As you must know, most older athletes will suffer a medical or physical setback, some may never have time to compete in a new age group, waiting another full year to comply with the “elite” athlete oriented rules of USATF.

Your support of USATF Masters rules that are oriented to the 22-year-old Olympian, not the 60-year-old athlete, is one of the reasons for declining game attendance. The submaster group does not offer much future promise as their numbers are down since the 90s as well. Your comments ignore these points.

Your comment that three 100-year-old ?athletes were not age verified at Senior Games is irrelevant to my questions to you in my email to you. Who cares?

I have had three spinal fusion surgeries in the last seven years. Typically 50% of people go on permanent disability, after just one of these complex surgeries.

I have been an All-American at M40, 45, 50, 55 in the 100, 200 and 400 meters, despite these physical setbacks. I have also been successful in private enterprise , starting with 0 financial backing, supervising employees and retiring comfortably at 58 years old. The most important fact I have learned in the business world is to LISTEN to your customer, not be be defensive, ignore your competition and hope they go away.

My main concern to you, Mr Harvey, is that I am a member since 1996 of USATF and I represent the larger, silent majority of average athletes that pay our dues to USATF each year and are to be represented my our officers, the USATF Masters management team.

We are your members, not people to be spoken to in a condescending manner. “Utterly ridiculous”? Really? Is this the way a president speaks to a member that helps pays your salary and expenses? Maybe it’s time for a change.

Meanwhile let’s savor the great efforts in ABQ, including those by Julia “Hurricane” Hawkins who at 103 became the oldest female trackster — and rated a New York Times story. The oldster fieldster is the late Ruth Frith of Australia, who died five years ago at the 104 but was actively throwing at age 102.