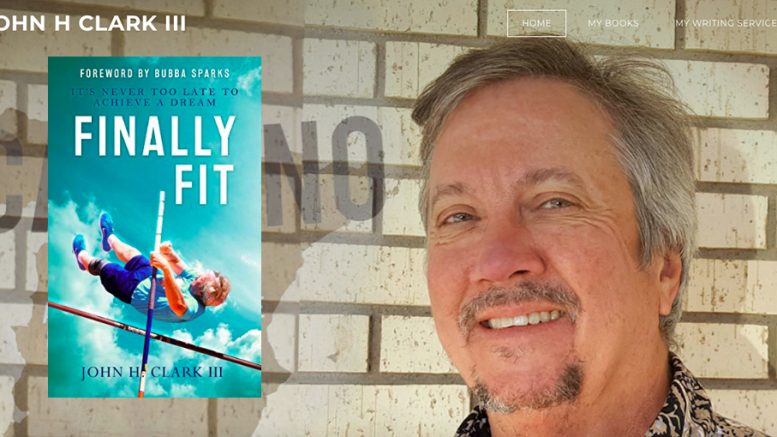 John H. Clark III spins the true tale of track discovery — his own memoir as a newbie pole vaulter.

Spend an hour with Bubba Sparks and you’re a goner. You’ll become a vaulter. In the case of author John H. Clark III, all it took was a Facebook query to Bubba, his older classmate from Houston’s Scarborough High School.

“Do you think I could take up pole vaulting for the first time in my life at 60 years old?”

Published six days after Valentine’s Day, it also serves as a love letter to what I call the Pole Vault Tribe. (I’m a member in bad standing of the High Jump and Sprint Tribes.) John Clark’s series at the 2019 National Senior Games in Albuquerque.

An equally deserving title, however, would be: “Fitting Tribute: How an NAIA Champion Lifted My Spirits.”

Doug “Bubba” Sparks is the apostle of geezer stick jumping. I’ve known him for more than 20 years, and he’s been a positive influence on hundreds. See this profile. Last November, when I noted in a FB comment how my lone vault at Kansas was 10 feet in an intrasquad decathlon, Bubba replied: “That’s a very good jump!” Made my day, month and year.

A former 18-footer at Southwest Texas, Bubba is a hero of John’s book. But John displays his own courage by describing his battle with depression. And his story wouldn’t be less gripping if it was about stamp collecting. John’s just a crackerjack writer — using a newsman’s style of short, descriptive, punchy paragraphs to advance his story. (He once wrote for the Houston Post.)

His hike to fitness encounters the usual masters speed bumps, but he makes the odyssey a page-turning joy. I finished the 182-pager book in two sittings.

“Pole vaulting has given me a second chance to discover who and what I truly am,” he writes. “Be myself. Really be myself. Maybe for the first time in my life.”

Not many people will identify with his vault infatuation. But his message is universal: Discover your DNA and nurture it.

Few people could describe this process as well as John. So I’m his latest fan.

“I love a good story,” he says. “The stories I most like writing are stories about people’s lives. Everybody has an interesting story – everybody. Your life is a fascinating story, whether you realize it or not.”

I wrote him to check out the status of his book and his new side gig — being a fitness trainer in Copperas Cove, Texas, north of Austin.

Here’s our chat via email:

Masterstrack.blog: How is training going so far this season? Where do you train?

It’s been a little slow-going this year, as far as training goes. I jumped in early January at Jack’s Texas Expo Explosion in Belton, Texas, and then at the National Pole Vault Summit in Reno, but I’ve been nursing a really sore left knee for four or five months, which has limited my vault practice quite a bit. The good news lately is that the knee — which was diagnosed initially as a possible MCL strain — is responding to some myofascial release treatments I’ve been getting, along with daily ice baths. So I’m just recently back to once-a-week vault practice, and hopefully working back up to twice a week.

What meets do you plan to enter this year?

I’m planning to jump in the Texas Senior Games in March, so I’ll be qualified for the next National Senior Games in 2021, although a planned trip to Europe might interfere with that particular meet. I’m planning to celebrate the 10th anniversary of my first Camino de Santiago pilgrimage with another 500-mile backpacking trek from Pamplona to Santiago de Compostela. That’s next summer. This summer, I’m going to the World Masters Athletic Championships in Toronto, my first international competition.

My very first meet was the 2018 Texas Senior Games, followed by the Oklahoma Senior Games, which qualified me for the 2019 National Senior Games in Albuquerque, which was an incredible experience where I set a new PR and finally broke the 8-foot mark. I’ve jumped in a number of other places, including the Reno Summit, and now I’ll get to experience a world championship event. Amazing.

What are your PV goals this year and beyond?

I want to jump 10 feet this year. I think it is well within reach. I jumped 8-6 this past December at the Bob Crites Invitational, and might have gone 9-0, but as soon as I climbed out of the pit after that new PR, I said to Don Curry, who was coaching me and filming my jumps, “There’s no way I can make 9 feet.” So of course I didn’t make it.

Beyond that, I’ll have to go for 10-6! Ultimately, my long-term goal is to pole vault long enough that I can set a world record when I’m 80 or 85, like my good buddy and fellow Texan, Don Isett.

How is your Fossil Fit business going?

I’ve been doing some personal training at the private gym I’ve been a member of for a long time, and that’s a lot of fun. I thoroughly enjoy watching people work hard and start getting results. The online business is still in the start-up stages, so nothing too exciting to report there, but things are going great with the new book and website, so we’re expecting good things.

Will the free download deadline be extended beyond Feb. 22?

No, the free promo won’t be extended, but I always bring it back from time to time with all my books. So “Finally Fit” will be offered free again at some point (for reading on Kindle).

What kind of reactions have you gotten so far to “Finally Fit”?

“Finally Fit” has been doing great. One day after we started promoting the free giveaway, it quickly went to No. 1 in several categories in Amazon’s free book store. Everybody who has read the book loves it.

What’s your current height and weight? What was it before vaulting?

I’m just under 6-feet-2, and right now my weight is around 205. I want to get back down at least to 195, maybe 190. Before I started vaulting, it was probably 245, and not an ounce of that was muscle. It makes me shudder to think about the shape I was in back then.

Who’s coaching and supporting you now?

Bubba coaches me long-distance now and sometimes in person, when I get down to Houston on the weekend and meet up with him. We live about three hours apart, and we talk all the time via text messages, e-mail and the occasional phone call. Bubba helps me with everything from vaulting, to working out, to just plain ol’ life.

So many people help me out. The pole vault community is an incredible thing. Now that I’m back to regular practice again, I’m fortunate to have Jack Chapman coaching me at workouts. Jack is a fantastic coach and a wonderful guy I’ve known for a long time.

Working on a new book? What topic?

I’ve got a book all finished, waiting on some finishing touches, that I plan to publish when the dust settles from “Finally Fit.” This next one is another compilation of newspaper columns I wrote over the years for a local paper. The working title is “Rattlesnakes and Route 66,” which I think is kinda catchy. One of the columns in the book is about a rattlesnake roundup I covered in a small central Texas town, and another is something from my experiences driving Route 66 a few years back.

This summer, I plan to spend some time with my Aunt Virginia down in La Marque, near Galveston, to start putting together a book about our family and its history. A family memoir, I guess you could call it. I think leaving as complete a story of my family’s history for future Clarks (my dad’s side of the family) and Ferns (my mother’s side) would be a pretty good legacy to leave.