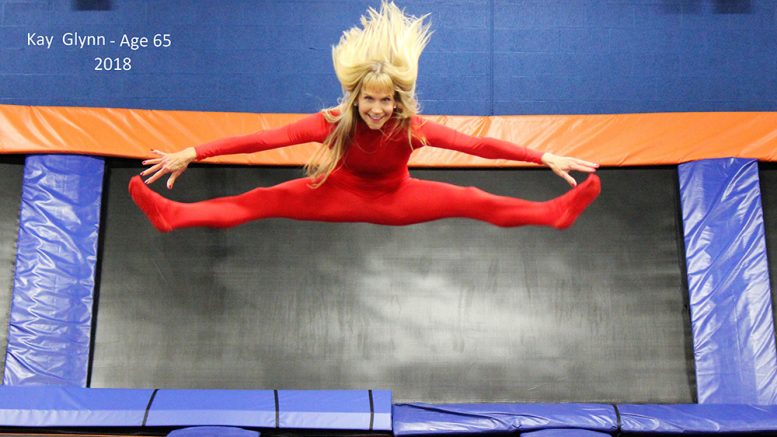 Kay, in her trademark red elf tights, is our Medicare masters star.

Kay Glynn of Hastings, Iowa, is 65 and still splits my sides with her annual Christmas photo greeting. But I’m onto her secret. It’s the long hair! She apparently took the story of Samson to heart. But I doubt anyone’s angling to mow her mane. So expect her to show her superhuman strength and flexibility for years to come (especially in the pole vault).

Here she is at Sky Zone trampoline park in Omaha, where she asked staff about when it was least busy. “They told me that if I were to get there right when they opened on a Tuesday, I’d probably be the only one there for about 30 minutes,” she writes. “So that was the plan — and it worked!” Kay was about 8 when she performed a trampoline split. That would be around 1961.

“I’ve always loved jumping — for as long as I can remember.  When I was a kid (about 8 in this polaroid photo), it was a prerequisite to have a trampoline near our motel when we took our much loved vacations from Iowa to Colorado!” she writes. “LOL I had forgotten about this pic my dad took until after my photo shoot!  Looks like my routine is pretty much the same. LOL”

It was her 12th consecutive holiday season photo offering.

Kay counts having done 58 splits during the video. Is that a W65 world record?

Kay Glynn is our Christmas elf, but will never put her athletic career on the shelf

Be the first to comment on "At 65, Kay Glynn jumps for joy in 12th annual Christmas photo greeting to masters tracksters"