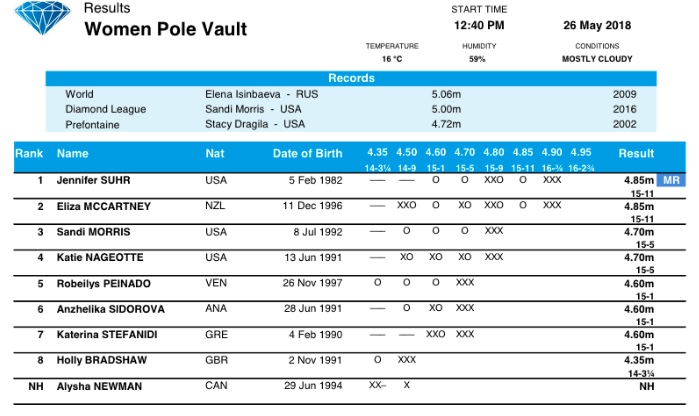 Social media didn’t seem to notice the age-group record. But WMA, bless its little heart, called attention to the mark on its coming-of-age Twitter feed.

The WMA site breathlessly announced: “Thats (sic) right, breaking news coming out of Eugene at the IAAF diamond league is that Jennifer Suhr of the USA has cleared 4.85m in the Pole Vault, not only to win the event with a new meet record but to also break the existing record for W35.”

Kudos to WMA for posting the news the day it happened. That’s heartening for an outfit we’ve dragged kicking and screaming into the 21st century, media-wise.

.@JennSuhr ?? not having it all her own way in the Women's PV. Both herself and Eliza McCartney ?? over at 4.85m. 4.90m up next!#EugeneDL #RoadToTheFinal #DiamondLeague pic.twitter.com/olx5HzVuKL