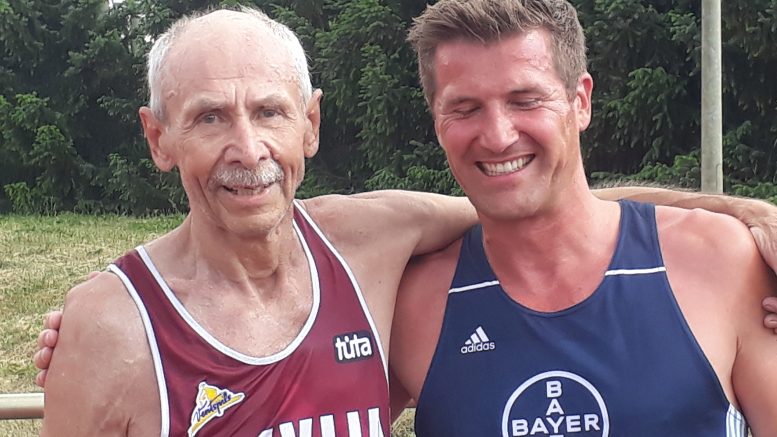 Valdis Cela is not a masters household name. Perhaps he should be after becoming the first M70 to break 8000 points in the decathlon. On Saturday and Sunday, the Latvian competed in the sixth annual Stendaler Hanse-Cup in Stendal, Germany. His 8142 (corrected from earlier 8143) blew away the listed mark of 7940 by German legend Rolf Geese, also at Stendal, in 2016. (See meet results.)

A German masters blog notes that Valdis got pacing help in the 1500-meter run by Timo Ritte — son-in-law of vault god Wolfgang Ritte, who also took part in the weekend dec. (M65 Wolfgang scored 7702, not far back of the listed WR of 8205.) WMA lists WR decs (and all the marks from each).

“Coached by his compatriot Dainis Kula, the 1980 Olympic javelin thrower, he improved by about five meters to 33.84 meters in the javelin throw and was back on world record level before the final 1,500m run,” said Lampis.net. “Timo Ritte (née Stolle) of the SC Bayer 05 Uerdingen selflessly provided him pacemaker services. When his father-in-law Wolfgang Ritte (* 1953) had to give up because of too high oxygen debt (he has too little red blood cells), Timo tensed before the final round of one and a half laps from Cela and led him to the multi-fighter marathon in 6:25.93 minutes over the finish line.”