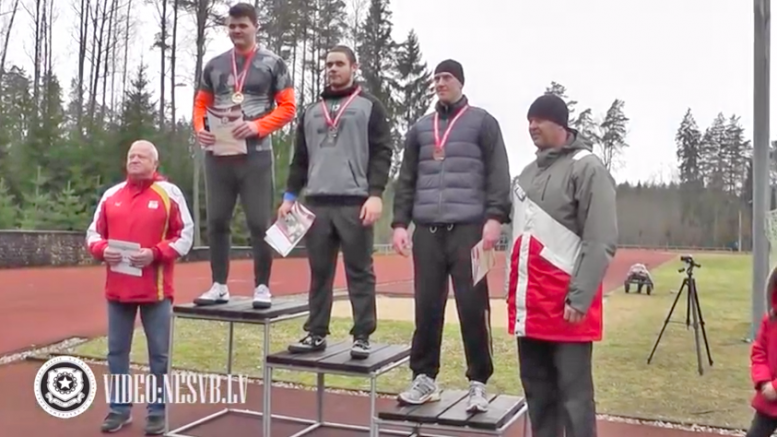 Sandris Linbergs, second from right, stands 6-5 1/2, so his discus wingspan is impressive. Photo taken in 2017.

Last March, Latvian athletes won 11 gold medals at Toruń indoors worlds in Poland, including an M35 thrower (nearing 39) named Sandris Linbergs. In 2018, he was listed on the World Athletics (formerly IAAF) site as the 1040th best discus thrower in the world.

At Torun, however, he tested positive for “a prohibited substance, its metabolites or markers.” And this week World Masters Athletics announced he was given a four-year suspension through March 23, 2023.

“As the result of this suspension, there will be a reallocation of the results shot put M35 and the results and medal places in the subsequent javelin and discus M35,” WMA said. “Please note the relevant athletes will be contacted directly in due course.”

So here are the new world medalists in the javelin:

No Americans contested those throws in that age group.

I’m writing Latvian and WMA officials to learn more about his case and what they found in his system. I’m also contacting him via other channels.

Meanwhile, his discus form looks pretty good in this 2017 video, showing him using all of the ring.