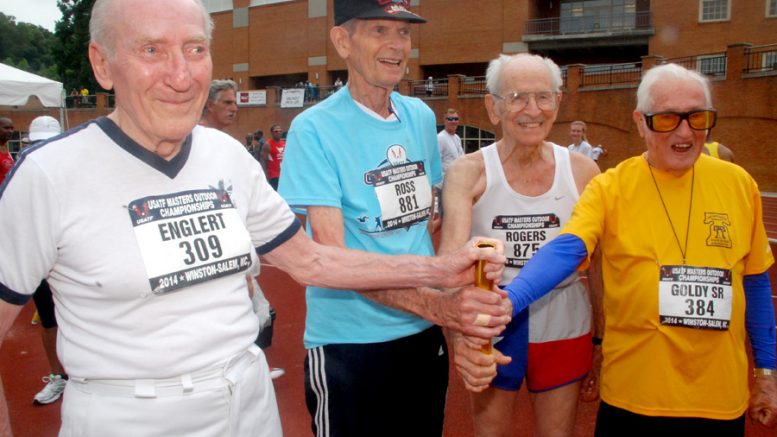 Orville Rogers wasn’t just a centenarian role model. He was a model track athlete, period. His training discipline, fierce will-to-win (see him overtaking Dixon Hemphill at indoor nationals 60) and willingness to share his secrets (through his recent book “The Running Man”) made him a hero to many.

At 2018 Spokane nationals, Orville scratched from the 800 amid high temperatures and his own excessive blood pressure, telling the local paper: “I doubt if I’ll be around a year from now to try it again. Who knows? It’s in God’s hands.”

He didn’t run at 2019 Ames outdoor nationals, months after undergoing his latest heart surgery, and didn’t get a chance to crush even more M100 records.

“He was an inspiration in running and wit,” said Bob Weiner, USATF Masters Championships media director. “He was the epitome of the mission of masters track of lifetime training and competition. We will all sorely miss him.” In February 2017, I reported how Orville looked forward to turning 100 so he could enter about five running events and five field events at both indoor and outdoor championships “so I can have 10, 15, 20 world records.”

His local Dallas paper reported on the eve of ABQ indoor nationals: “He set his first two world records in 2008, 16 years after bypass surgery to open six blocked arteries. The indoor track championships were held two weeks after Beth, his wife of 64 years, died. His family convinced him that she would want him to race. In 2011, Rogers suffered a major stroke. He requested the most rigorous rehab possible and pushed himself to return to his prestroke condition.”

With Orville gone, the only member of his fabled 4×100 relay team is Roy Englert, who starred at Ames. Teammates Charles Ross and Champion Goldy have passed.

In December 2013, when I interviewed Orville via email, he noted: “I must tell you that Dr. Kenneth Cooper, the author of ‘Aerobics,’ is my personal doctor, and has ‘kept me going’ for more than 40 years. He found my heart problem in 1993 when on his treadmill he noticed an inverted T wave. Subsequent investigation revealed six coronary arteries that were 80-95% blocked. (I had no previous symptoms.) All six were bypassed and still are open nearly 21 years later. It is also worth noting that I started running at age 50 after reading his book.”

I learned of Orville’s death the same day news shot around the globe of Harrison “Bones” Dillard dying at age 96. Harrison was the Olympic legend who upset favorites in the 1948 London Games 100 and won his specialty, the 110 hurdles, in the 1952 Helsinki Olympics.

And I also got word this week that an Arizona masters track star — thrower and jumper Dave Douglass — died Sept. 10 of colon cancer, less than a month short of turning 88.

Dave had Orvillesque goals, telling a local TV station in 2016 that his next goal was “Break the world record for the 100-year-olds. I want quality of life, and if I can’t have that, pull the plug or something!”

Bob Osterhoudt wrote me about Dave, saying: “He competed very successfully at the world, national and state levels in all aspects of masters track and field (except race walking) for very nearly 50 years, was 20 times a national champion, won two world titles and six world medals (all in Perth), and was the USATF M85 Male Athlete of the Year in 2016.”

Dave was also an exceptional gymnast in his youth (a letterman in the sport at Penn State), an accomplished student (B.S. and M.S., Penn State; Ph.D., Ohio State), an outstanding scientist and educator (in private industry, government agencies, and educational institutions; in the end, he was for 25 years a [full] professor in the Department of Materials Science and Engineering at UCLA), among the world’s foremost experts on the element zirconium, and a Life Master in bridge.

He was, moreover, among the leading and most popular figures in the sport in Arizona, a brilliant, earnest and humble man, and an asset to everyone in his ambit. His memory will be greatly cherished and he will be fondly remembered for all future time. Dave Douglass (standing at far left) was a sprint star in the 1970s and 1980s. Photo via National Masters News

Bones, Dave and Orville were poster boys for our sport. They’ll never be forgotten.

Rest in Peace Orville, what a life, what an inspiration to many. Thank you. https://t.co/WHKWIU0bYj