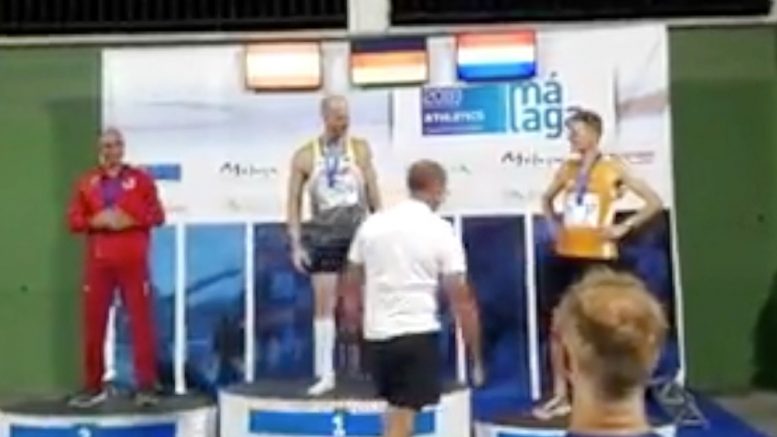 In Germany, singing “Deutschland, Deutschland über alles” (Germany, Germany above everything) is a Bozo No-No. Although the lyric was written in 1841 by August Heinrich Hoffmann von Fallersleben — and had nothing to do with the Nazis — it was adopted by Hitler and sung at the opening of the 1936 Berlin Olympics. Since 1952, the German national anthem has dropped the “Deutschland über alles” stanza. As soon as Thomas heard the opening words, he began singing the correct version for “Deutschlandlied” (The Song of Germany). He sang: “Einigkeit und Recht und Freiheit” (Unity and Justice and Freedom).

After the ceremony, he complained to German officials, and organizers yanked the Nazi version. An instrumental version was used for the 50-plus succeeding Germany gold medalists.

“Of course, we sang the right verses so loud that the pretty soft version was barely heard (on the video, unfortunately, you can hear it pretty loud),” Thomas told me via Facebook. “Afterwards, I told the German officials about it. They told me that they checked, but the Spanish officials must have removed that wrong version already. I am sure it was just a mistake.”

Video of the medal ceremony was first posted on YouTube by Rolf Griesberg His title was: “Verbotene Nazi-Strophe als gesungene Version der Nationalhymne bei den Deutschen Titelträgern.” You get the drift.

A comment on the video, posted in German under a pseudonym, said (in a Google translation): “It is not forbidden to sing the first verse of the Deutschlandlied. My generation sang the whole song in the 1960s at the Musikunterrieocht in school. And now concretely to the recording of the first stanza to the award ceremony: One should always believe in the good. Probably the one responsible for the award ceremony at the venue, who theoretically must provide all the national anthems of the countries participating in the championship, has made a mistake. Point off. It has nothing to do with Nazi propaganda. And who claims something else, who wants to scapegoat someone scapegoat.”

When Thomas was announced as world champion, he was credited with a world record.

Thomas reminded me that 2015 Lyon worlds champion Jean-Luc Duez of France has a better mark — noted on my old site — “which has not been officially recognized for unknown reasons.”

BTW, I interviewed Thomas in 2016, who noted that he met his American wife when he competed for the University of Arizona. (My wife, Chris, also is a UofA Wildcat.) So we have that in common.

Anyhoo, one hopes Toronto 2020 will vet its national anthems carefully. Or I’ll be writing, “Oh, Canada….”