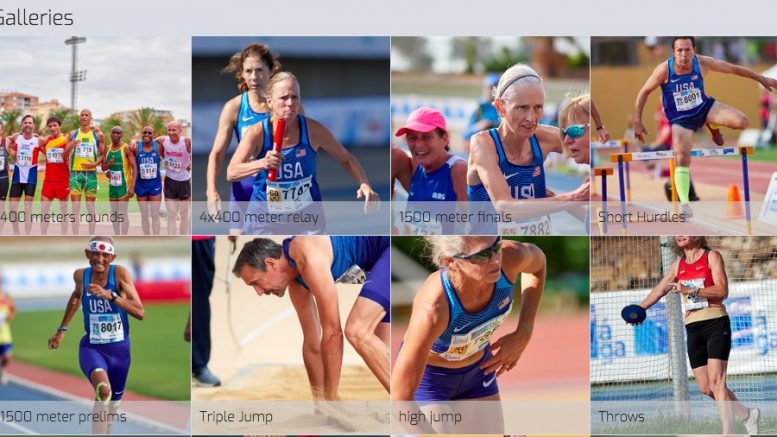 Dave Albo is one of several Malaga photographers posting their best work. Check them out!

Four years ago, Jim Ryun came to San Diego and I was over-the-moon. Not from seeing the mile legend (I’d interviewed him a half-dozen times since the mid-1970s). I was ecstatic to meet Rich Clarkson — a fellow KU alumnus who photographed Jim since high school and became the National Geographic’s photo editor for a while. I also have schmoozed with Pulitzer Prize winning shooter Don Bartletti, who retired a few years ago from the Los Angeles Times. So who were my heroes at Malaga?

You betcha — the lensmen and woman (Alex Rotas) whose work I’ve been envying the past two weeks. Dave Albo of Colorado, Doug “Shaggy” Smith of Canada, Rob Jerome of New York and Tom Phillips (like Alex) of UK did absolutely stunning work.

Rob shot 24,000 pictures over 12 days, and Tom took pictures of the Brits (mainly) despite his disappointment in not being able to compete in the sprints — having recently ripped his right hammie. “I’ll probably blog something about the life of a photographer at these Championships,” he says. “It won’t be for the faint-hearted!”

See Doug’s collection here. Links to others are below.

While waiting for USATF to name M70 WR sprinter Charles Allie its Athlete of the Week (my prediction after his five golds and 400 WR), here are samples of stellar art from the marathon men and woman of the camera game.

And in case you were wondering, Team USA did fine — with medals chronicled by thrower Jerry Bookin-Weiner.

I spent a big chunk of today shooting 800 metres finals at the World Masters Athletics Championships here in Malaga. Several races had finishes decideded by hundredths of a second. Here’s the M55, M50 and M40 races. pic.twitter.com/yztf6r5D09

American sprint sensation Charles Allie is number 7714 in this photo from Sunday’s World Masters Athletics Championships 200 metres. He won, and had won the 100 metres two days earlier. Today, he shattered the world record for men aged 70 to 75 in the 400 heats in 57.26. /1 pic.twitter.com/IF6eN2Et9I

How’s it feel to be a World Champion? Difficult sometimes to put feelings into words. Think this picture sums it up ? pic.twitter.com/aBy0rUFA98

The four participants in the 200 metres for men in the 90 to 95 age category receive the applause of the crowd at this evening’s action at the World Masters Athletics Championships in Malaga. pic.twitter.com/halaLATXfu

“Splash!” A photo from one of the 3,000 metres steeplechase races at the recent World Masters Athletics Championships in Malaga. The full set of those I shot of these races will be online later today. pic.twitter.com/0upiVnCPDB

Another shot to challenge the stereotypes. This is Rose Green of the USA, winner of the recent World Masters Athletics Championships 100 metres for women aged 80 to 85 (yes, that’s correct). She also won the 200 metres and the 400 metres a few days later. pic.twitter.com/o75JfFORcR

My vote for tattoo of the World Masters Athletics Championships. Or does he just drink a lot of Red Bull? pic.twitter.com/pNZUxTjWk2

Weight throw is an event not often seen outside Masters athletics. The World Masters Athletics Championships event was well supported – even in the 90 to 95 age group for men, there were six participants. It’s a bit like a cross between hammer and shot put. Istvan Kovaks was 4th. pic.twitter.com/QW8Fn5l5MY

Fifty years ago almost exactly, John Watts set a British discus record that stood for a long time. Here he is, in action in the M75 shot put, at the World Masters Athletics Championships in Malaga, yesterday. pic.twitter.com/qdcX82ZARo

Possibly my favourite of my photos so far from the World Masters Athletics Championships here in Malaga. Eliud Kirui of Kenya moving into the lead in the M40 3,000 metres steeplechase last Friday evening. There’s a lot going on in this shot. pic.twitter.com/QmuurX6jnd

Susie McLoughlin came very close indeed to winning the World Masters W40 200 metres on Sunday. She looked great in the semifinal too, which is where I shot this: pic.twitter.com/MCuPnguQKZ

Looking at this shot, I almost think Rick Beardsell was smiling his way through his World Masters Championships 200 metres semi final in Malaga last Sunday. Lovely relaxation at speed. pic.twitter.com/odTDjDwWtE

To those who tell me Masters athletes are not role models, I give you Nora Kutti, 95 year-old Estonian shot-putter as evidence you are wrong. pic.twitter.com/LwJo00axTW

If I asked you to name a country that sent a 90 year-old woman shot putter to the World Masters Athletics Championships, I bet you would not have said “Peru” before today. pic.twitter.com/k89GwP7atO

A shot of the final of the 100 metres final for men aged 85 to 90 at the recent World Masters Athletics Championships. Won by Hiroo Tanaka of Japan (red shorts). As a life affirming aside, there were enough entrants that these guys had to run heats to qualify for the final! pic.twitter.com/VE5GTlxxug

This is currently the fastest 90 year-old man in the world. Yoshiyaki Shimizu of Brazil. Won gold at 100m, 200m & 400m at the recent World Masters Athletics Championships. Set new world age group records for 200 and 400, but was a second slower than the current M90 100m record! pic.twitter.com/1FARlJrkGz

#mastersathlete Charles Allie, USA crossing the line of the men's 200m dash, 70-74yo age group yesterday in 26.06secs at #WMAMalaga2018 just short of his own #worldrecord of 25.75secs. This is proper, world-class #athletics. @BBCSport & @SkySportsNews you are missing a trick here pic.twitter.com/Cy6tygLrNS

Canadian #mastersathlete Earl Fee, 89 embodies empowerment as he races to bronze in the M400m, 85-89yo age group at #WMAMalaga2018 in 1:30.22mins – all the more remarkable as he's at the top of this age category. His #WorldRecord of 1:17.12 remained untouched ? pic.twitter.com/bXpnT88GcN

GB's Sue Yeomans, 65, is the embodiment of physical & mental presence, empowerment, focus & determination in her run-up to gold in the #PoleVault event, W65-69yo age group at #WMAMalaga2018. Muscle wastage inevitable as we age? I don't think so #UseItOrLoseIt pic.twitter.com/Lb6vDyzRtJ

Wanted to share 101yo #mastersathlete Man Kaur's joy too after she finished the 200m race at #WMAMalaga2018 yesterday. Sport, eh? You gotta love it. It brings so much joy? A 1st for me too photographing someone in the 100-104yo age group: hard to focus I was so starstruck! pic.twitter.com/dDKJUNFFVC