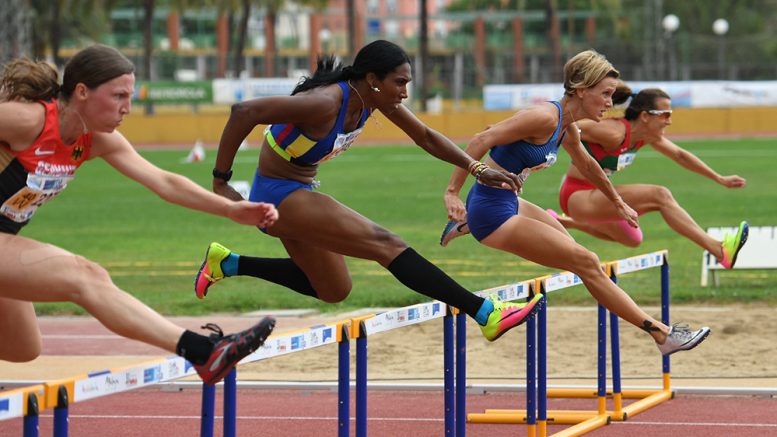 Yanelle (in long black socks) had the height advantage in Malaga but not speed, although she overcame another hurdler at end. Photo by Rob Jerome

W40 sprinter/hurdler Yanelle Del Mar Zape of Colombia never realized her dream of competing in the Olympics. She fell short of making the team for 2016 Rio Games. But at Malaga — after missing the 200-meter final by a few tenths — she finally medaled. She won bronze in the 80-meter hurdles Saturday in 11.81 seconds (behind America’s Rachel Guest in 11.73 and gold medalist Annette Funck of Germany in 11.37).

Her achievement is remarkable for another reason. She’s transgender.

Her story was told in a Colombian paper.

“I did not want to make it visible, but good,” says a funky translation. “It’s something like personal, which one has been separated … Because many people after I made the transition has never heard, I have never been asked, I have been treated normal. But I’m ready for this, to provide a grain of sand, so that it becomes visible and help here in that aspect.”

From his past, in which he was a hurdler and even represented Colombia in different competitions of the Olympic cycle, he speaks little. Vladimir — that was his name — was buried, although he acknowledges that it was a positive stage, “because with him I did almost all my life.” Four years ago, when the treatment ended, his life is different.

The IOC authorized in 2003 the participation of transgender athletes in the Games, with the requirement of two years of hormone therapy plus surgery, a rule that has just changed because since 2016 it will not be necessary to go through the operating room (opening for transgender).

So how does WMA deal with trans athletes? I went to the expert — Joanna Harper, the gender scientist who herself transitioned years ago.

She wrote me: “I have known about Yanelle since 2016. She was 39 then. In fact, I just returned from an international sports medicine meeting in Brazil where I spoke about Yanelle among other athletes. I know of one other trans athlete who won a medal at the WMA meet a few years ago, but she lives in stealth mode.”

Joanna confirmed that regulations state that trans women must have had one year of low testosterone as a result of hormone therapy.

“Yanelle has been on hormones for years, had surgery a few years back, and should have no problems with the WMA going forward,” she said.

At least one other trans woman has medaled in WMA world meets, according to another source. Australia’s Caroline Layt competed in at least three world indoor meets — 2008 Ferrand, 2010 Kamloops and 2014 Budapest. She won a couple 4×200 relay medals.

So Yanelle is good to go — and any other trans who jumps through hormonal hoops. (But I haven’t heard back from WMA officials for comment.)

These results may be the most interesting of the meet.

But the lady who won the W40 short hurdles has a little heavier baggage — a 2008 doping sanction. Annette Funck’s violation was relatively minor, though.

IAAF said she tested positive for presence of the prohibited substance Betamethasone (S9. Glucocorticosteroids) in her doping control sample.

“This doping violation relates to a sample collected in-competition on 30.05.08 in Dressau, GER, at the Anhalt 2008 meeting,” IAAF said. “In conformity with the IAAF Rules, the ARAF has imposed the following sanction for a first violation: 2 months ineligibility (07.07.08 – 06.09.08) (and) disqualification of all results from the competition where the sample was collected.”