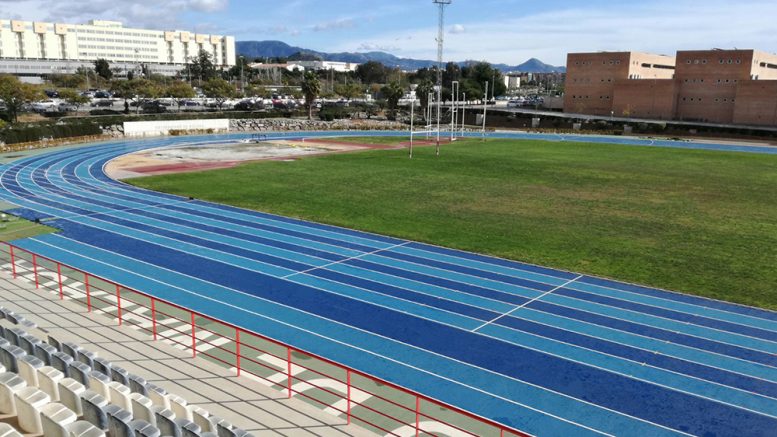 University of Malaga's two-tone Mondo track will host 80 percent of 400 and 800 heats, I hear.

At WMA worlds in September, sprinters will be pleased to learn, Mondo is the surface of at least one track — at the University of Málaga. But that’s considered a secondary venue. The main one is the City of Málaga’s combined football (soccer) and athletics (track) stadium. Unsure which spikes are recommended for the non-Mondo stadium, but pyramid and Christmas tree spikes (specified for Mondo) may suffice for all.

In any case, the 2012 and 2016 Olympics were contested on Mondo — because it’s speed friendly. (I’ve heard that distance runners have a problem with it, but oh well.)

Here’s how a European company site describes it:

The athletic pavement installed on the UMA track is composed of two layers of rubber vulcanized together, so that the surface presents a uniform, continuous and seamless aspect along the entire course. The top layer guarantees stability and resistance to the nails, while its anti-reflective embossing provides grip, traction and excellent drainage.

The subbase, on the other hand, has a geometric structure of four-sided air cells that are deformable in two directions to provide impact absorption and energy return. Sportflex Super X thus guarantees an optimal sport performance combining with comfort for athletes, safety and durability.

Other venues at worlds are listed here.

Why is WMA hiding responses to Malaga survey? Page of critical comments left out

5 Comments on "Mondo in Málaga: Is that your favorite track and field surface?"