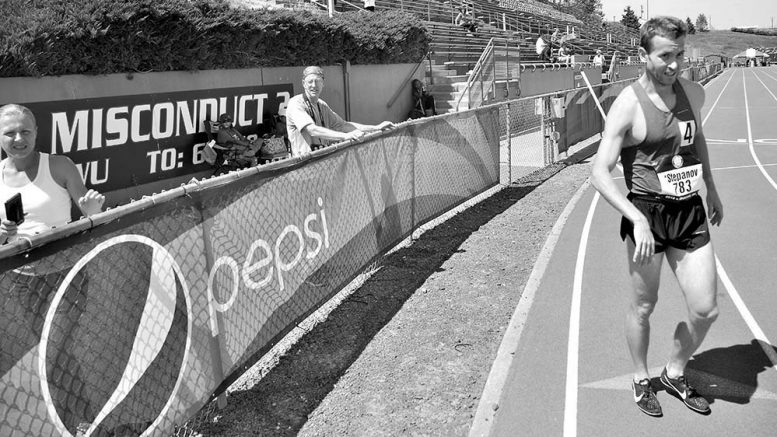 Russian self-exile Vitaly Stepanov won the M35 800 at Spokane nationals — entered as an independent athlete. He should be able to compete under the flag of his own choice.

Even though my long-hurdles hero Edwin Moses is going ballistic, I’m happy to hear that the World Anti-Doping Agency is poised to reinstate Russia — let its athletes compete internationally.

On Thursday, WADA may accept the recommendation of its compliance review committee. The panel says Russia could soon meet two demands — admit it cheated and give WADA access to its drug-testing lab.

“Russia’s anti-doping agency has been suspended since 2015 after a WADA commissioned report revealed alleged widespread doping in the country, although Russia has repeatedly denied state involvement,” Reuters noted.
“WADA President Craig Reedie said in March that Russia’s refusal to acknowledge the systemic doping alleged in the McLaren report and its failure to allow access to Moscow’s suspended anti-doping laboratory were blocking its return.”

Of course, many hurdles remain for Russians to return to worlds and the Games. The IAAF and IOC have a say.

But for the sake of hundreds (maybe thousands) of Russian adult age-groupers, I hope the mess is resolved and masters can enter 2020 Toronto worlds. They’re collateral damage in a war that really doesn’t involve them (unless anyone can prove Putin gives a crap about geezer track).

It would be ironic justice if Russians compete in Toronto worlds. In 1975, as I’ve noted, South Africans faced a ban at the first WAVA world meet on account of apartheid. The Safricans ultimately were allowed to compete. But it was dicey for a while.

Certainly, governments have a right to impose economic sanctions against racist or criminal regimes, but in the 1975 case — as well as the 1980 Moscow boycott by America and some allies — it was a cut-off-your-nose-to-spite-your-face situation that only served to punish innocents.

Had certain elements prevailed in 1936, Jesse Owens wouldn’t have had a chance to rub Hitler’s nose in it.

In any case, WMA can choose to ignore IAAF and let Russians compete immediately. It’s too late for the relays Sunday at Malaga worlds, but why not let Russkies run, jump and throw at Eurovets and other WMA regional meets in 2019? WMA has had “masters exceptions” for years. Why not show some cojones now?