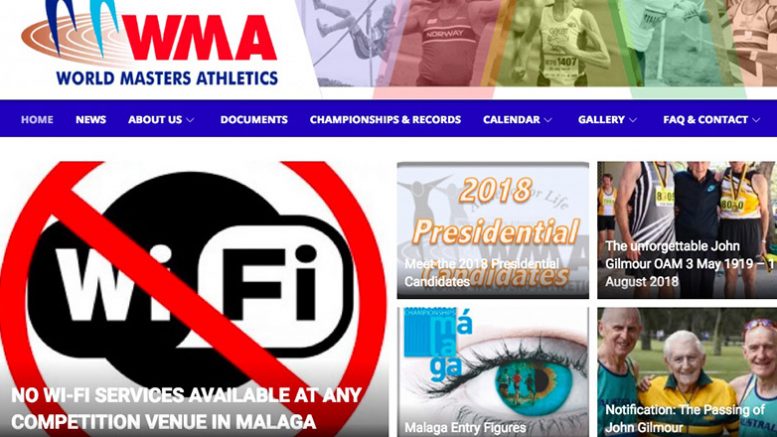 Until Tuesday, you could count on World Masters Athletics to sing its own version of “Home on the Range” — where never is heard a discouraging word. Now, for the first time, our governing body is showing fangs. With the blessing of lame-duck Prez Stan Perkins, the WMA homepage is criticizing the host of a world meet before it even starts.

WMA roared: “It has now been confirmed that there will be no wi-fi coverage available for the athletes, officials or anyone else attending the various athletics stadiums and venues in the upcoming WMA Track and Field Athletics Championships in Malaga, Spain. Organisers have advised that these services do not exist at the venues and the cost of providing the services are beyond the resources of the LOC.”

WMA President Stan Perkins in confirming these services would not be available expressed both frustration and disappointment at this situation. In pursuing the matter he had pointed out that the facilities to be used included a University track and a stadium that was used by the Malaga Football Club and assumed that both of these facilities would have a wi-fi service available. That was not the case and just to make the point local organisers also indicated that not even FC Barcelona and Madrid provided these services at their competition facilities!

I suspect entrants — being savvy adults — will find work-arounds. Mobile phones can be used as Wi-Fi hotspots, and such devices can stream live video via Facebook and other platforms.

I’m not in high dudgeon over Net access (although I’ll be loaded for bear if results aren’t posted expeditiously). But I’m high as a kite to see WMA take a stand for athletes. The usual SOP is celebrating officials and meet organizers. Athletes? What athletes?

My hero Al Sheahen, who called out WMA when need be, is cheering from the heavens.

Be the first to comment on "Wonder of wonders: WMA wallops Malaga LOC for not having Wi-Fi at stadiums"