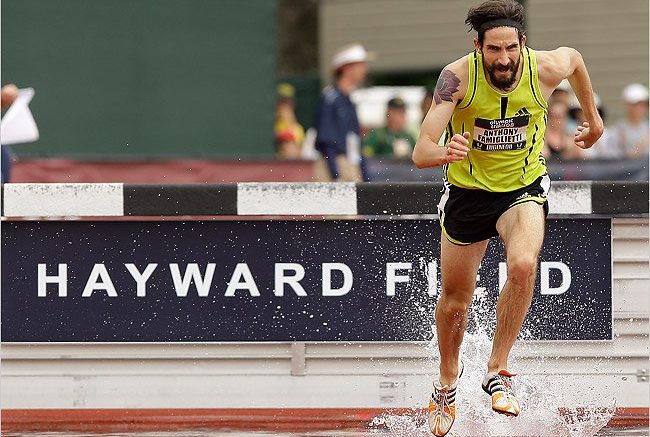 Anthony Famiglietti, at 2008 Eugene Trials, has hurdles to clear on way to mile goal. Photo by Charlie Riedel

Anthony Famiglietti, a two-time Olympian with a mile PR of 3:55.71 (in 2006), turns 40 in five months. He’s gearing up by training hard, pitching a documentary and letting the world know he’s shooting for a sub-4. It’s a stretch. But you gotta admire the grit. See Martin Fritz Huber’s story in Outside. The former steepler’s “moonshot mile is perhaps an unusual way to confront the beast of senescence, but it makes a crazy kind of sense. When you’ve spent more than half your life constructing your identity around the fact that you can run faster than 99.99 percent of the world’s population, it’s not easy to let go,” Martin writes.

More: “Famiglietti says he is taking his current training very seriously. He is being coached by Alan Webb, the American record holder in the mile. The main challenge is dealing with accumulated injury, like severe arthritis in his right foot and ankle joints that have taken a beating from years of competitive steeplechasing.”

I’m officially training to break a 4 minute mile when I turn 40 this fall. My 1st stop on the journey will be the @tcmarathon Medtronic TC mile tomorrow in Minneapolis! Big thanks to my new coach @alan_webb1 & @RunDoyen for getting my training in line to race again.

Fams says: “Sometimes, when I start to run, my left foot will dislocate and I’ll have to run up to a tree, place it between the branches, and pop it back into place.”

Occasionally he will solicit help from a lucky stranger, Martin adds.

What do you think?

Be the first to comment on "Will Anthony Famiglietti run sub-4 at 40? Milestone is goal of steeple Olympian"