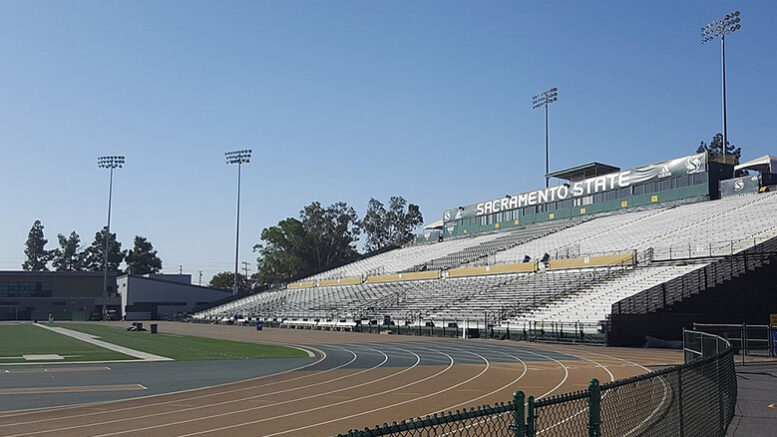 Hornet Stadium at Sacramento State has seen many masters records. Hoping 2021 affords us some more.

In late July 2010, USATF masters nationals were staged at Sacramento State University, site of the 2000 and 2004 Olympic Trials. The 2010 meet was a warmup for 2011 worlds, also mainly at Hornet Stadium.

Now the question: Will Sacramento host 2021 masters nationals — either in July or delayed till August? It’s officially still on, as national chair Jerry Bookin-Weiner said today on Facebook. But the dates are fluid.

My vote is for August — with a 91-degree average high, it’s under the 92 average high for July.

Another reason: An extra month of vaccinations.

Last month, the masters-friendly 2021 Millrose Games were canceled. Now rumors are being swatted that Sacramento has been canceled or dates delayed.

The backup plan for some is National Senior Games, set Nov. 5-18 in Fort Lauderdale. (But with many 2020 qualifying meets spiked, I’m unsure how people can get into the Florida meet.)

Lots of factors will decide whether Sacto is a go. What percentage of America is vaccinated? Will foreign entries be allowed (as is tradition)? Will proof of a COVID test be required, and how close to the meet? And will enough officials be willing to haul their masks to Northern California? Will entries justify the usual four-day schedule?

But WMA world meets have been pushed back a year, as Prez Margit Jungmann announced Dec. 22:

It was a matter of seeing the facts and making responsible and courageous decisions. That is why we have now decided with our partners in Tampere, Edmonton and Gothenburg that we look to the year 2022 with confidence and come back with power. With the future LOCs, we agreed to the new calendar. Considering that traveling in 2021 will still be difficult, for some even impossible, the vaccine will take time to protect the people, the council decided to postpone Tampere, who stepped in for Toronto, to 2022, followed by Edmonton (indoors) in 2023 and Gothenburg (outdoors) in 2024.

On national circuits, I expect a late 2021 restart. On world stage, 2022 depends on vaccination rollouts and whether enough major masters nations are up to snuff on shots.

The unspoken fear: How many nations won’t be allowed at worlds?

I can see certain undervaccinated countries being told: Get your acts together first. (And another wildcard: Will Canada, Finland and Sweden have travel bans those years? Which countries banned?)

Too many wrinkles to count. Just like our older age groups.

Bottom line: Our sport will prevail. But patience is mandatory.