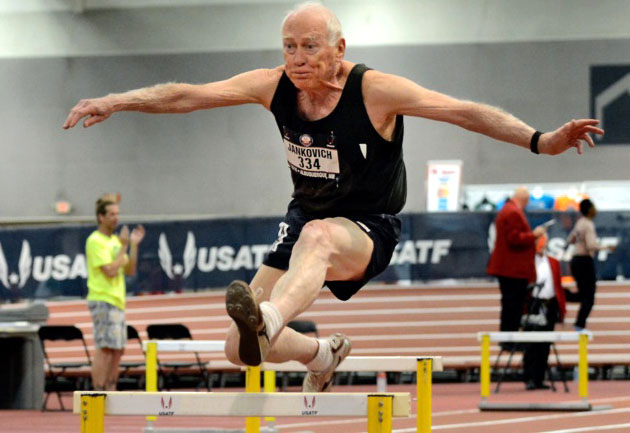 Bill Jankovich of Racine, Wisconsin, will shoot for indoor pentathlon AR of 3112 by the late, great Ralph Maxwell.

Jim Barrineau, the Olympic high jumper, is venturing WAY outside his comfort zone. My M60 friend is entered in the pentathlon, which includes the 60 hurdles and 1000 meters. Trust me. This will be tough.

At 69, Hall of Famer Nolan Shaheed returns to nationals for the middle-distance Blue Plate Special — 800, mile and 300. He’ll also run the 400 as an appetizer.

At 70, former 110 WR hurdler Stan Druckrey of South Milwaukee — another Hall of Famer — is entered in the 60 hurdles — the first time I’ve seen his name in ages.

Here’s the bulk of the release posted on PR Newswire:

WINSTON-SALEM, N.C., Feb. 22, 2019 /PRNewswire/ — On Friday-Sunday, March 1-3, 2019, more than 1000 Masters Athletes come from all over the US to compete at JDL Fast Track in Winston-Salem.
Many of the top US Track and Field athletes attend the Indoor Championships, including 130 North Carolina and 31 Winston-Salem-area athletes, and two area track teams – Piedmont Pacers and Charlotte Track Club – are among 111 clubs present.

Click this link for lists of NC athletes, all athletes, and club affiliations.

Also attending is WMA Outstanding Male Athlete of the Year Charles Allie, 71, of Pittsburgh, Pennsylvania, who competes in the sprints. Allie set the M70 world record in the 100m, 200m, and 400m last year.

***Athlete drug testing will be conducted at the Championships

World Masters Championship (WMA):  More than 200 USATF masters athletes go on to compete in the WMA Indoor Championships in Torun, Poland.  Cheer on #TeamUSATF and follow the results on our social media accounts:

Special Thanks to: Jay Wind for assistance compiling this material.

“Many of the athletes here are doing their final tuneup before going to Torun, Poland, to compete in the World Masters Indoor Championships, the highest level of competition of the masters track & field world.

“I couldn’t be more proud of the U.S. Team; athletes, officials, financial contributors and administrators.  We are truly working together to become the world’s number one masters track and field team,” Rex Harvey, Chair MTF, stated.