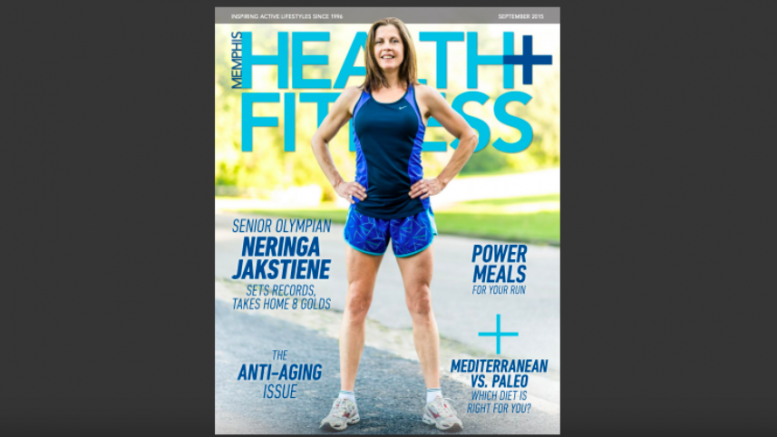 Neringa Jakstiene was the cover girl in 2015 of Memphis Health & Fitness magazine. She belongs in Sports Illustrated.

Neringa Jakstiene of Memphis via Lithiuania (in 1994) won two W50 golds (hep and triple jump) and a silver (80 hurdles) at Malaga worlds last year, so it was no surprise that she’d excel as a W55 at Winston-Salem nationals. But three world records in one day?

USATF did a good roundup of top marks, including Irene Obera’s not unexpected W85 world record for 400 meters.

In the Women’s 400m, 85-year old Irene Obera (Fremont, California; Sierra Gold) returned from a two-year absence to set a World Masters record in her new 85-89 age group with a time of 2:10.23. Obera, a 1996 USATF Masters Hall of Fame inductee and 2014 Masters Athlete of the year, is now the current masters world record holder in 10 events (five indoors and five outdoors) and is entered in eight events throughout the weekend.

Noel Ruebel (Winston-Salem, North Carolina), former Wake Forest track coach, and the country’s first high schooler to clear 7-feet in the indoor high jump in 1974, won the Men’s Pentathlon 60-64 with 3,366 points ahead of second place finisher Eugene Anton’s (Wellesley Hills, Massachusetts; So Cal Track Club) 3,257 points. Anton won the first two events of the day clocking 9.90 in the 60m hurdles and jumped 4.33/14-2.50 in the long jump. Then Ruebel took over, dominating the shot put with a heave of 12.46m/40-10.50, six and a half feet further than Anton. Ruebel and Anton tied in the high jump at 1.48m/4-10.25 and then Ruebel finished third in the 1000m with a time of 4:14.53 claiming 458 points to secure the Masters title on his hometown track.

Karen Swisher (Shawnee, Kansas; Heartland Racewalkers) broke her own Masters American record in the Women’s One Mile Race Walk 65-69 age group by nearly three seconds with a time of 9:46.61.

In the 60-64 Women’s One Mile Race Walk, Maryanne Daniel (Clinton, Connecticut; Connecticut Racewalkers), the 2018 USATF Masters Indoor Champion and American record holder in the event in the 55-59 age group, smashed the Masters American record with a time of 8:58.44, taking more than 18 seconds off the previous record.

Be the first to comment on "Newbie W55 Neringa Jakstiene claims 3 world records, plus an AR, at Winston-Salem"