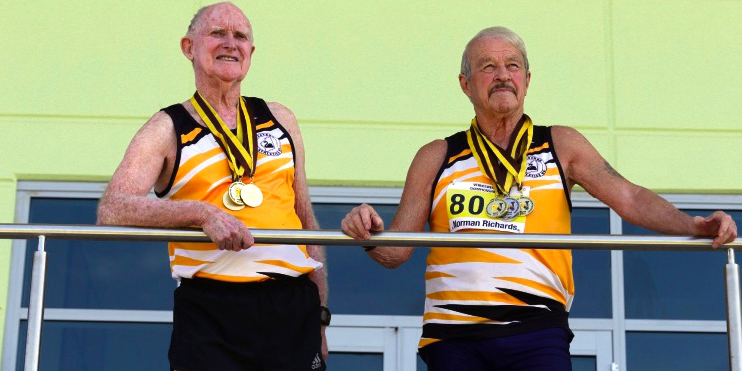 I tell newcomers to our niche that a major joy is joining a traveling tribe. The High Jump Tribe. The Throwers Tribe. The Hurdles Tribe. We hold reunions at nationals and worlds. Now comes a story Down Under by Laura Pond of Stirling Times — a tale of the Sprint Tribe. “Masters athletes Norm Richards (80) and Barrie Kernaghan (78) have enjoyed a friendly rivalry for nearly 40 years,” Laura writes. “Mr. Richards, of Woodlands, and Karrinyup resident Mr. Kernaghan competed at the recent Australian Masters Athletics Championships at the WA Athletics Stadium, achieving 12 medals between them.” Barrie says: “We have competed together all over the world in relay teams for Australia, winning various medals.” He’ll head to Spain in September to defend world titles in the 100 and 200. (But Norm is skipping Malaga.) Which brings me to ask: Who in masters track has the longest rivalry? It might be W80s Irene Obera or Christel Donley. Or could it be Canadian M85 Earl Fee or M90 New Zealander Alistair Mackay? Who have you competed against the longest?

2 Comments on "4 decades as friends and rivals: Aussie sprinters Kernaghan and Richards"