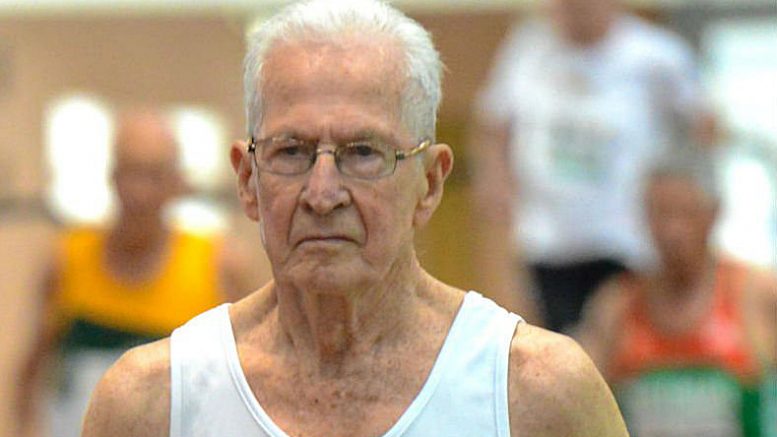 At 90, Earl Fee thinks he'll remain the oldest man to beat his age in the 400-meter dash.

Wednesday would have been David Pain’s 97th birthday, and I’m marking the occasion by posting video of his funeral I shot April 6, 2019, at Faith Presbyterian Church in San Diego. Earl Fee, Diane Hoffman and Diane Friedman didn’t attend — but their latest ninety-something world record performances in the 400-meter dash are a virtual memorial to the founder of masters track.

At Toronto WMA regionals July 19, Earl notched his 60th world age-group record, clocking 89.15 in the 400 at age 90 — and becoming the oldest to beat his age over the one-lap race. “In all probability I will remain, for some time, the oldest person in the world history to go under their age in the 400,” Earl wrote on Facebook. “To knock me off this perch would require a faster world record at age 90 — not possible at a higher age since performance declines too increasingly rapid from 90 to 95 and higher as noted above, and besides there are no recorded specific age records, e.g., for 91 etc. [At least not officially] Also, a faster record at age 90 would require a greater than 110% age graded performance, which is very rare.”

Last Saturday, I joined maybe 50 other tracksters at the San Diego USATF Association masters meet, combined with the annual Chuck McMahon Memorial Meet. It was thrown together in recent months and left out a lot of standard events, including the 100, vertical jumps and several throws. But Paul Greer, a local coach acting as emcee, noted on the PA that the first USATF masters nationals were held any the same site — Balboa Stadium at San Diego High School — nearly the same weekend in 1968.

No ARs or WRs were set Saturday in San Diego — unless you consider my 200 time a record for the worst ever run by a 65-year-old.

In any case, you gotta appreciate the geezers kicking butt on the record books. David Pain would have been pleased.

And I never got to note the M35 world record 100 by 37-year-old Justin Gatlin, who smoked a 9.87 at the Prefontaine Classic. (At Ames nationals, the announcer said Gatlin’s record was 9.92, clocked a week later at Lausanne IAAF meet.) Sadly (or oddly), Justin was a DNS at Des Moines open nationals.

I report here on my 400m age group 90-94 outdoor world record attempt yesterday at the big NCCWMA meet at the Toronto Track and Field Centre–since I like to write and also to keep my close and faraway friends up- to-date.

The conditions were not ideal: 33C and “feels like 45C”, (Globe and Mail), but I had taken loads of water in the hours before, so the heat did not trouble me. Also, the schedule was more than an hour behind due to a rain delay, with more than 30 minutes in the call room just before the race. On the walk to the start, 8 of us 80 years and up–I the oldest– past the crowded stands, the announcer introduced me as “the incredible Earl Fee”, putting some pressure on me.

I take the lead immediately. For many days before I have been thinking: don’t step on the lane line to avoid disqualification, use powerful arm action the last 100 metres, and make sure to run through the finish line. At 300 metres I feel my race is going fairly well, but the finish line seems too far-far away so I forget all about the powerful arm action and concentrate on the next 50 metres and then the finish. I run about 4 metres past the finish as planned, but my main competition the speedy 80 age group Rogers from Trinidad is suddenly there and beats me by 0.05 second. But immediately it is announced Earl Fee has broken the 400m world record in 89.15 seconds. I had broken the 90-94 age group record by 0.20 seconds. Based on my training, I expected my time would be close to the existing record.

One of my best races ever since age graded at 110%, my highest ever indicating it (the 89.35 by Shimizu of Japan at the Malaga Worlds) was definitely a hard record to beat. I feel blessed and fortunate in spite of several potential problems which could have occurred.

Our founding father has passed: David Pain dies at 96 at home in San Diego