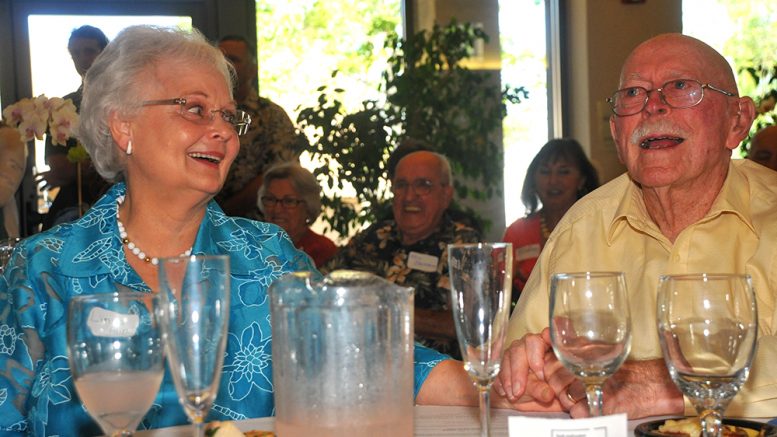 Linda and David Pain enjoyed his 90th birthday party in 2012 at the San Diego church where he'll be remembered on April 6.

Friends and family of David Pain, the Columbus of masters track, will gather at 2 p.m. Saturday, April 6, at Faith Presbyterian Church near his San Diego home for a Celebration of Life. On Sunday, his family-written obituary appeared in The San Diego Union-Tribune. Read it here.

Among many other things, we learn that David “started a lawn-cutting business and worked full time as a gardener throughout high school. His love of gardening continued into his 80s with a plot filled with vegetables as well as many flower varieties, including prize-worthy Epiphyllums. During his senior year, he became a U.S. citizen and would later serve in the Atlantic and Pacific aboard the USS Mount Vernon (AP-22) in World War II. He qualified for the V-12 Navy College Training Program and was sent to Occidental College as well as UCLA, studying business administration. He entered USC Law School in 1946 and passed the California Bar in 1949.”

If you can’t attend — but would like to share your memories — send me a note, which I can voice at the service.

Some weeks back, former WMA President Stan Perkins sent me his own recollections and tribute to David:

MEMORIES OF THE FATHER OF WORLD MASTERS ATHLETICS –
the late DAVID PAIN.

I have read the very well written tribute to the late David Pain by Bridget Cushen who knew him far better than I did. Bridget has detailed the achievements of David who was the driving force that led to what we now know as World Masters Athletics, and touched upon the many aspects of his dedication and love of our sport and his driven desire to see
competitive athletics for ‘older persons’ become a reality.

David was known to me through the eyes of others who had been part of his journey in establishing Masters Athletics. In particular the great runner John Gilmour from Australia, who himself died just last year, and Clem Green from New Zealand (now deceased), shared wonderful stories of David’s achievements, his drive to establish the Masters and his great capabilities as an administrator in those establishment years.

I have lost count of the times that the journey via the 1972 Munich Olympics (that so sadly included the slaughter of many Israeli athletes), to the very successful first Masters competition meeting held in Crystal Palace, London, has been told and re-told. David’s success in bringing this bold initiative caught the imagination of older athletes across the world.

Three years later in 1975 the first World Masters Athletics championships took place in Toronto, Canada – the city that will be the venue for WMA’s 2020 World Stadia championships. It would have been wonderful to have David attend what will be a great meet – but that is not to be but we know he will be watching from that grandstand in the sky and enjoying all the marvelous competition, camaraderie and zest for active life that is a WMA World track and field championship.

In 2011 when our championships were held in Sacramento, California, I seized the opportunity to honour two great Americans who had made very significant contributions to Masters Athletics. David Pain and Al Sheahan were gracious and humble recipients of the honours bestowed upon them. Certainly I had a distinct feeling of being amongst greatness when in their presence.

How fortunate were we who were present at that General Assembly to have shared some time with David and Al.

Most if not all of those early pioneers of Masters Athletics have now passed on, but we must never forget them or their achievements. David Pain started the long journey along a pathway that now spreads across the whole world and brings health, friendship and spirited competition to “older” athletes in more than 160 countries. Perhaps recognition can be permanently established in honour of David and his fellow trailblazers to perpetuate their efforts.