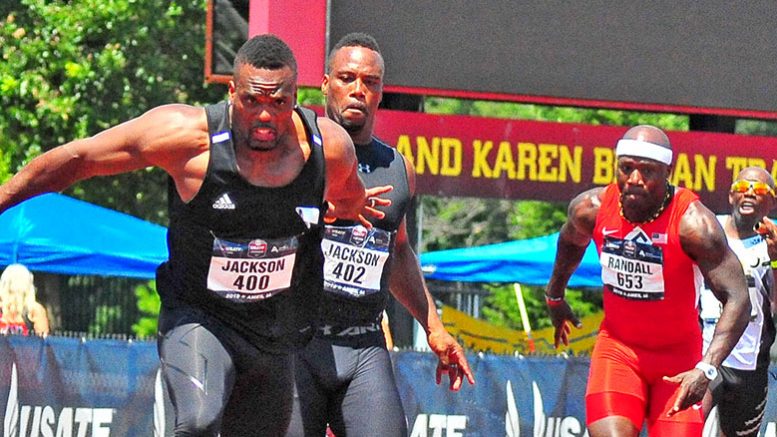 M35 Patrick Jackson hands off to twin brother and former NFL running back Fred Jackson in a 4x100 relay.

WMA regionals wrapped up Sunday in Toronto, with world record efforts by W70 hammer specialist Myrle Mensey (in that event and the throws pent) and about-to-be-sworn-in-as-American Neringa Jakstiene (upping her own pentathlon WR from Ames). But Southern California’s Gunnar Linde was wrongly credited with an M90 WR in the 2K steeple. He ran 15:47.32 in the Ontario heat and humidity but scorched a 14:40.5 in mid-June in Los Angeles.

The meet invited athletes from 31 North American, Central American and Caribbean nations — but the U.S. and Canada dominated, with many meet records falling on the Mondo tracks where 2020 worlds will be held. The meet set a record for the region’s championships — 1,104 entries (411 women, 693 men), according to the president’s report. (Results are here.)

But I’m still glowing from Ames nationals. Despite taking last in the M65 100 and high jump, I was thrilled to run all-out without re-injuring my calf strain of a month earlier. I also had a blast meeting with athletes at my B&B — breakfast chats so fascinating that I got to the track late for photos.

But I got a few nice shots, especially the Sunday relays (making up for the fact I left the memory card out of my Nikon, missing Tony Echeandia’s M55 400 hurdles world record. Sigh).

Besides the shuttle hurdles and awards banquet photos posted earlier, here are some other collections:

As always, I don’t charge for these high-resolution images. But I welcome love offerings.

Dave’s gallery from Toronto is here.

Rob’s gallery from Ames is here.

Be the first to comment on "Photo galleries galore (mine and others) from Ames nationals, Toronto WMA regionals"