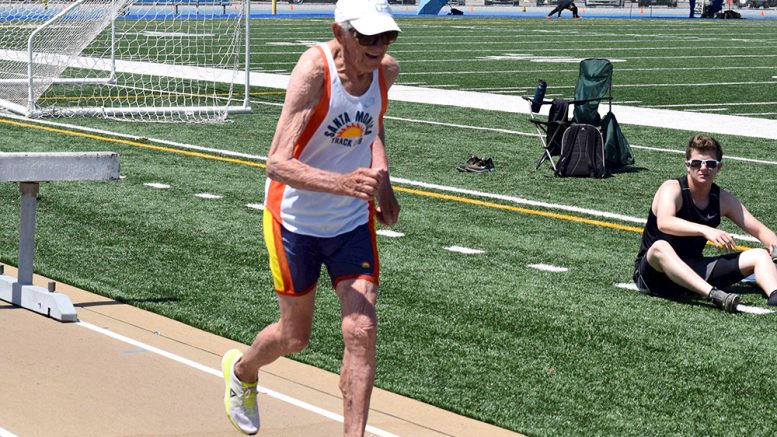 Gunnar Linde has energy to smile amid his M90 world record in the 2K steeplechase. Photo via Jeff Davison

How fast was 90-year-old Gunnar Linde when he ran the five-lap steeplechase over the weekend in Los Angeles? If he’d been racing listed M90 record-holder Charles Ross, Gunnar would have lapped him. That’s how I grok Gunnar’s 14:40.54 2K steeple WR Sunday at West Los Angeles College. Charles holds the listed WR of 18:54.10.

Special thanks to three M60 gents — Brian Nelson, Dennis Wilson and meet director Andy Hecker — who finished the race to make sure no technical rules glitches kept Gunnar from going in the WMA record books. (BTW, he ran 30-inch barriers despite the fact standard hurdles for his age group are 27 inches.)

M75 distance dude E.E. “Doc” Murdock wrote me: “I talked to Gunnar for a while before the race as we strategized about how to best get over the barriers, and I told him what the existing world record was (he was not aware of it). He ran a good solid race and finished very strong.”

Gunnar of Santa Monica sticks to SoCal meets of late, so we won’t see him this weekend at National Senior Games in Albuquerque (but see the other entrants). In any case, Gunnar’s mark is gonna last a long time.

Also worth celebrating are the 39 men and 10 women (both records) who did the decathlon at the USATF Masters Combined Events Championships in Waukesha, Wisconsin — especially the American records by W40 Angela Herzner (6067 points), W65 Rita Hanscom (8286) and M85 Bill Jankovich (4759), as reported by meet organizer Jeff Watry. Also notable: 94-year-old George Roudebush scored 1461 despite being DQ’d in the hurdles, no-heighting in the vault and DNF’ing in the 400 and 1500.

See results at Jeff’s decamouse website. World Masters Athletics doesn’t contest the women’s dec, so ARs are all we can set. Decathletes come in two genders, these ladies at Waukesha want you to know. Photo by Rob Jerome

Rob Jerome took his usual sensational photos at Wisconsin (which also contested a heptathlon). Video is posted on the Decamouse Facebook page.