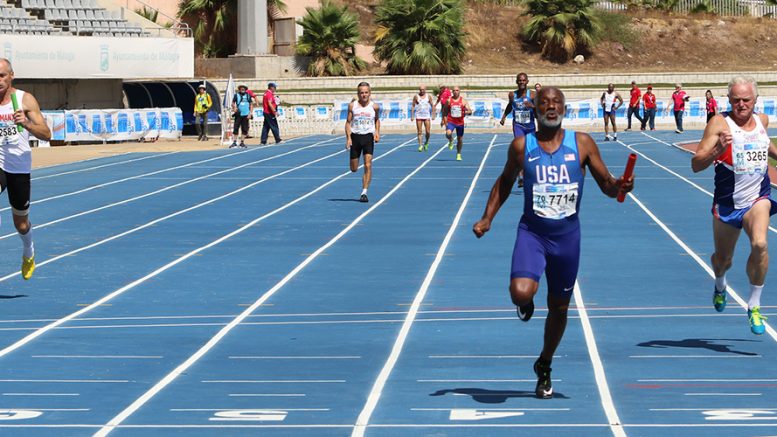 Surprising nobody, Charles Allie has been named USATF Masters Athlete of the Year. In a related decision by the USATF Masters Awards Committee, Charlie and Lesley Hinz were named male and female masters athletes of the year. The committee chaired by W40 combined-eventer Rachel Guest — herself an honoree — also introduced event-group athletes of the year (along with the usual age-group AoYs). Photographer Rob Jerome did a wonderful job of highlighting award winners.

Here’s the USATF press release on Charlie as overall AoY:

Charles Allie (Pittsburgh, Pennsylvania) is no stranger to accolades. Since entering a new age group this year, the 2013 WMA Masters Athlete of the Year has claimed multiple M70 age group world records, including five outdoor and the indoor 400m.

At the start of the outdoor season, Allie clocked in an age group world best sub-26 200m (25.75) at an exhibition race as part of the USATF Outdoor Championships in Des Moines, Iowa.

He went on to perform exceptionally well at the USATF Masters Outdoor Championships in Spokane, Washington. Allie won the M70 400m in a then-pending world record time, also championing in the 100m, 200m and 4x100m relay.

The pinnacle of Allie’s 2018 season took place at the World Masters Athletics Championships in Malaga, Spain. The Houston Elite athlete represented Team USATF and won five gold medals, including smashing his own world record in the 70-74 age group 400m (57.26). He also won the 100m (13.22), 200m (26.06) and picked up two more relay golds.

“I am so elated on my selection as the USATF Masters Male Athlete of the year,” said Allie. “This is such a great honor for any track and field athlete. There are so many great athletes who are worthy for such recognition as well, and I am so grateful to be representing the Masters athlete in receiving this award. Thank you so much to those responsible for me to receive this award.”

Here’s a compilation of Rob’s posts: