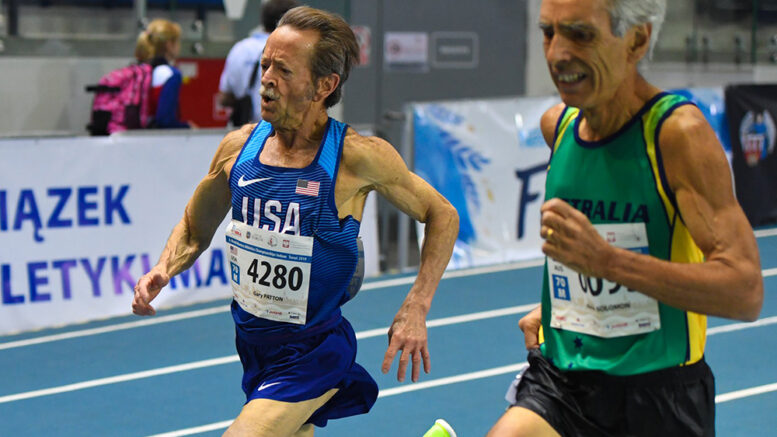 Gary Patton battled Kevin Solomon of Australia in the last few meters of the 3000 at 2019 Torun worlds, clocking 11:30.11 for M70 silver. Photo by Rob Jerome

Last December, Masters Hall of Famer Gary Patton turned 75 and set his eyes on some middle-distance records. First up, in January, was Paul Perry’s 6:10.98 American age-group record in the indoor mile. Gary scorched a Wichita State track in 5:55.26 — a rare sub-6 for a 75-year-old. (The listed WR is 5:41.95 by Canada’s Earl Fee.) But the Kansas meet lacked a USATF sanction, so the mark was rejected. Not to worry.

The result: American outdoor records in the 800 and 1500 and a mile road record.

But also: Being named USATF Masters male Athlete of the Year — a first for him. (W80 Kathy Bergen won her second female AOY honor.)

I’ve been a fan of Gary James Patton for years (even though he represented the SoCal Track Club, a rival of my one-time Striders club.) The last time we chatted online was 2017, after he set the M70 indoor mile record.

I asked him what drove him to excel in track post-70.

He offered: “Ego. But not only that — the more success I have. the more likely I’ll stay with my fitness routine, diet and healthy habits. I shudder to see the shape so many of the people my age are in and think, ‘There, but for the grace of God, go I.’”

Not long after his AOY was announced, I shot him a quickie Q&A, which he answered after getting back from the Huntsman World Senior Games in Utah. There he lapped his competition at 3000 meters and finished in 12:22.1 — not far off the listed AR of 12:04.0 set way back in 1992 by Scotty Carter.

He might have had the 3K record in June. But weather intervened.

Masterstrack.blog: How many meets this year and what records set?

Gary Patton: I did an indoor mile at a masters/college/youth meet at Wichita State in January and ran what would be an M75 AR except for the fact that it was not a USATF sanctioned meet, so not eligible. In March I ran a 1500 outdoors in Surprise, Arizona, in 5:22.38. Before that was ratified, my 5:19.87 in Ames at the Outdoors clinched the AR.

Also in June I went to the USATF Minnesota Open/Masters Championships and was on pace to get the AR in the 3000 when the race was stopped due to lightning. I was 10 1/2 laps in, with only 2 to go.

Two weeks before outdoor nationals in Ames I ran a road mile in Lincoln, Nebrasaka, and got the M75 road mile record – 5:55. The week before the Ames event, I made a record attempt in the 5000 at the NW Region Championships in Seattle and fell short. I don’t do enough distance training to excel at that event.

I got golds in the 800, 1500 and 5000 at the Ames Championships. I just returned from the Huntsman World Senior Games where I made another attempt at the 3000 record, but fell short. I’m blaming it on a too-brief warmup and the altitude factor, but it is a challenging record and the distance is a stretch for me.

What physical or life challenges did you overcome to perform so well this year?

I was 4 feet 9 and a flabby 85 pounds when I graduated from high school – looking pretty much like a sixth-grader. I was a student trainer in three sports and admired the jocks. My late growth spurt got me all the way to my spectacular 5-4. But I started running then and haven’t stopped for 54 years.
How did you train during pandemic?

My training didn’t change at all during the pandemic. I fear if I let up, I’ll never get it all back. I did a number of virtual races to gauge my fitness and to tune up for my M75 year.

Who are your coaches? Support team?

I’m self-coached. My support team is my wife, Barb. Also of course all the running friends and acquaintances I’ve made over the years.

Considering any other events next year?

I’m considering the USATF Club Cross Country Champs in December, which is the first of the 2022 Masters Grand Prix Distance series. I may try to repeat my 2016 Grand Prix Championship for M70.

Which events can you improve on?

I can improve on the 3000-10,000 events by doing more mileage in training, but I hate long slow distance. I enjoy the fast training.

What are your goals for 2022? Which major meets will you attend?

I may make one or two trips to the Armory in NYC, since that is a fast track where I’ve set records before. And of course the USATF Indoor Masters is there in March. USATF Minnesota hosts several indoor masters/open events where I can make record attempts without the hassle and expense of going to NYC. The National Senior Games in May and the USATF Outdoor Masters in July will be the big U.S. meets next year. The WMA Champs in Finland in June/July is Priority 1 on my schedule.

Will you ever retire from track?

Yes. When they have to help me off the track because I’m holding up the show.