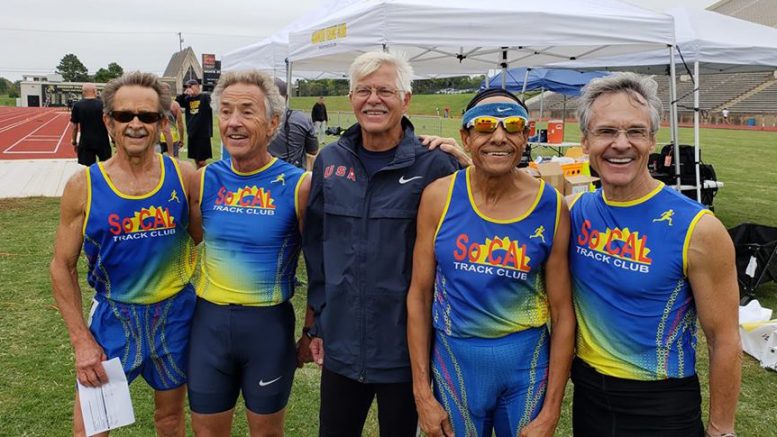 Relay records fall so often that I tend to get jaded. But when an M70 SoCal Track Club foursome ran in Wichita a couple weekends ago, the result was stunning and historic. The team of Gary Patton, Tim Wigger, Salih Talib and Grady Cash clocked 10:51.08 in the 4×800 to crush the listed WR of 11:09.87 by Jim Selby, Alfonse Escobar, Gunnar Linde and Avery Bryant at 1998 Orono nationals. That’s 20 years ago! In July, the team of Fred Lindsley, Grady, Tim and
Salih ran a pending WR of 11:03.46 at West Regionals in Culver City, California. (I noted it in passing here, overshadowed by some other marks,)

Grady says: “Fred Lindsley flew in from California to be an alternate if anyone came up injured at the last minute. Fred ran a 69-second 400 later in the meet, so he was ready if we needed him. … Overcast. low 70s, wind gusting to 10m ph on front stretch, which bothered some of us.”

The SoCal USATF site added: “This is the same SoCal group that broke the indoor 4×800 relay club record at the USATF Indoor National Championship meet in Landover, MD, in March.”