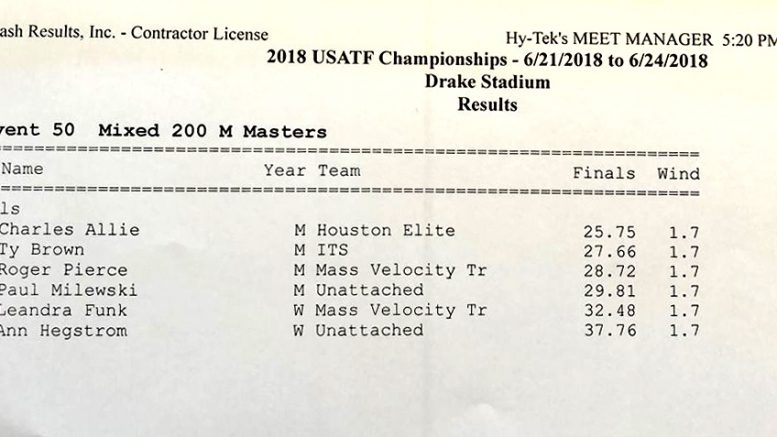 Hall of Famer and former WMA Athlete of the Year Charles Allie pulled a Usain Bolt at Des Moines USA open nationals Thursday, running away with a “mixed masters” 200 exhibition in a spectacular 25.75 seconds. That made him, at 70, the oldest human to go sub-26 in the deuce. He crushed the listed M70 world record of 26.47 by Britain’s Glyn Sutton at 2015 Lyon worlds. On the Age-Graded Tables, his mark is equivalent to an open (20-30) time of 19.68. (Methinks it should be 19.08.)

(Charlie ran a 26.45 indoor WR this past winter, so he improved the any-conditions record as well.)

Charlie, a Pittsburgh resident who runs with Houston Elite, won’t complain about racing on a Thursday — the first time since masters exhibitions began in 2000 that our races at open nationals weren’t contested on a Saturday or Sunday. But I will.

I don’t know who slotted the races (originally men’s 70-plus and women’s over-60 events) on a day with few in the stands. I won’t blame Joy Upshaw, our national masters exhibitions chair. Perhaps she faced a take-it-or-leave-it ultimatum.

But I’m peeved at the dismissive way the race was called and posted. At 9:15 p.m. Pacific – about seven hours after the race — results weren’t online on usatf.org. But I was sent a picture of apparently a paper printout, confirming Charlie ran with a legal 1.7 mps wind (out of Lane 5).

The British announcer — reading off bio sheets but having no clue about masters track — apparently was Tim Hutchings. Social media comments were ruthless.

Sarah Lawson, a W55 star long sprinter herself, wrote on Facebook: “Was anyone watching the M70 exhibition 200? The commentary was ridiculous! After Charlie finished in 25-ish secs, the commentator was like: ‘Wow! I wonder how often he trains? Do you think he trains everyday for track and field?’ It would be great if he had one clue about the worldwide sport of masters track and field, and the fact that there are incredible performances every year by super-committed athletes. Annoying.”

Don’t get me started on NBC Sports Gold, which charges you to watch a webcast of a track meet that needs every eyeball it can get.

USATF’s summary of the day relegated the WR to the end of a long press release.

Masters have made much progress on the exhibition circuit, but Thursday’s two-woman turnout was papered over by adding them to the men’s race at the last minute and the terrible announcing added insult. Mt. SAC Relays also saw a pair of two-women races.

This has to stop, or we’ll lose the showcases forever.

Meanwhile, Charlie’s race for the ages: