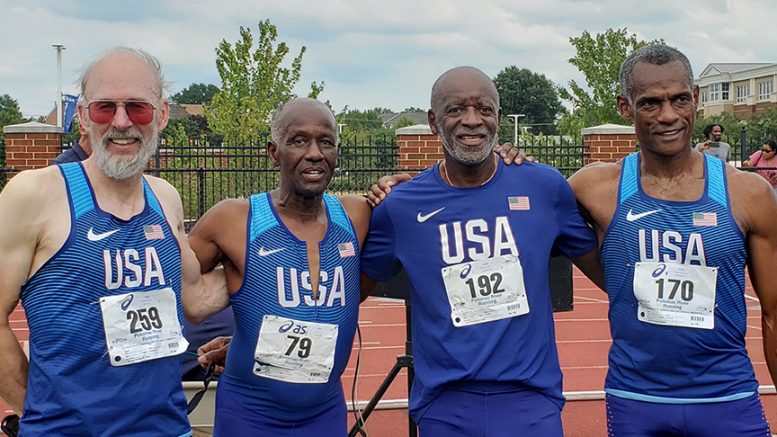 From left to right are Dave, Charlie, Thomas and George — a Fab Four for our niche. Photo by Penny Ingles

Results are posted for Sunday’s events at the 44th Annual Potomac Valley Games at T.C. Williams High School in Alexandria, Virginia. There a team called Unattached ‘A’ clocked 4:01.03 in the 4×400 relay. But it was a startling mark — a pending world record — with four men over 65 averaging just over 60 seconds each. They included a 59.5 by M70 world record-holder Charles Allie, 72. Leadoff in 59.8 was David Ortman of Seattle, followed by Pittsburgh’s Charlie; Thomas A. Jones, 65, of Glenn Dale, Maryland, in 61.2 and George Haywood, 66, of Washington, D.C., in about 60.5. Amazing.

So the race for the first sub-4 relay post-65 is on. The next opportunity is at the European Masters Athletics Championships — a WMA regional like Toronto — starting Thursday in Venice, Italy. The 4x4s are Sept. 15. With the WR time and wearing their national uniforms are From left to right are Dave, Charlie, Thomas and George. Photo by Penny Ingles