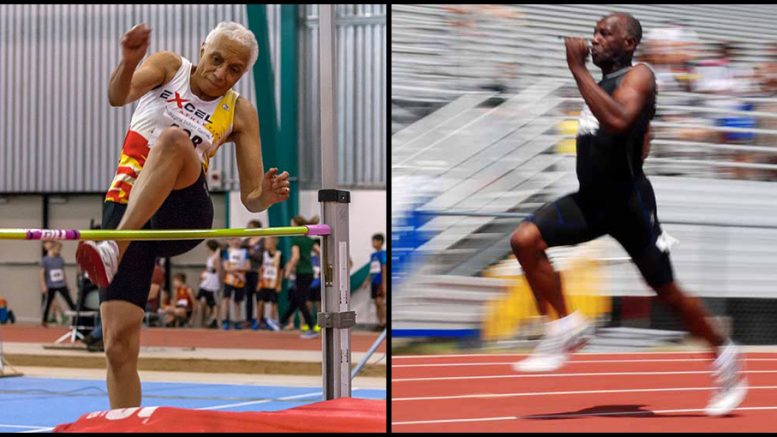 Perhaps Karla del Grande should do jumps. That’s my theory on why the Canadian world-record holder and Malaga sprints champ was left in the dust by countrywoman Carol Lafayette-Boyd for World Masters Athlete of the Year (female divison). W75 Carol had jumps on her resume as WMA considered its annual picks (along with 100 WR of 15.03 and 200 WR of 31.56). W65 Karla didn’t.

On the male side, M70 Charles Allie was a safe and obvious choice for Athlete of the Year, announced Thursday. His records for 200 (25.75) and 400 (57.26) this year could stand for decades — if he doesn’t approach them himself.

“I was on my way home driving from doing some errands when my good friend and teammate, Dr. Alan Tissenbaum, called to congratulate me,” Charlie told me when asked about how he learned of winning his second WMA AOY (the first being in 2013). “At the time, I wasn’t aware or been informed about the WMA-AOY winners being announced.”

Then Charlie checked his phone and saw my email congratulating him on AOY.

“At this point, I was thrilled that it was official,” he said. “Of course, I was extremely overjoyed, but it is a little difficult to overreact or celebrate while driving. But I did make it home safely through traffic in record time.”

He says his wife, Jackie, and their first grandson, Victor, were the first to know after he got back home.

“By now, most of our Facebook friends may have been informed about my latest recognition,” Charlie wrote. “I extend my appreciation and gratitude to all my friends, teammates, and well wishers for you support and encouragement.”

I asked Charlie how many sprint years he has left in his legs.

“At this point of my track career, I am taking each year as it comes along. I just feel so blessed that I am still able compete and be a part of this great masters T&F organization.

His goals for the coming year?

“Hopefully, I can continue to stay healthy and compete in as many meets as possible and just focus on my running events and enjoy the competition and friendships. Also, I would like to congratulate all of the WMA athletes who were nominees in their respective events. Much success to you and all that you have accomplished.”

Coincidentally, in 2013 Charlie’s female counterpart for AOY was another Canadian — multi-venter Christa Bortignon. This year Christa was runner-up in the multi-events group.

I also wrote to Carol, who said she learned of her AOY award when Donna Dixon congratulated her on Facebook from the posting Rob D’Avellar [Jerome] had put up.

How did Carol react? “I was grateful, thanked God for the results and called my oldest sister to let her know,” she said via email. “She will inform others. I will when I finish some important paperwork. I did share post on Facebook.”

How many more years of elite sprinting does Carol have left?

“As I am 76, at least 30 left,” she said, “although I plan on spending more family time and getting back to researching genealogy.”

What are her time or awards goals this coming year?

“I would like to break records indoors in the 60, 200 and long jump and outdoors 100, 200 and triple. I gave up high jump – prefer horizontal to vertical jumping.”

Some nice videos on Carol and Charlie: