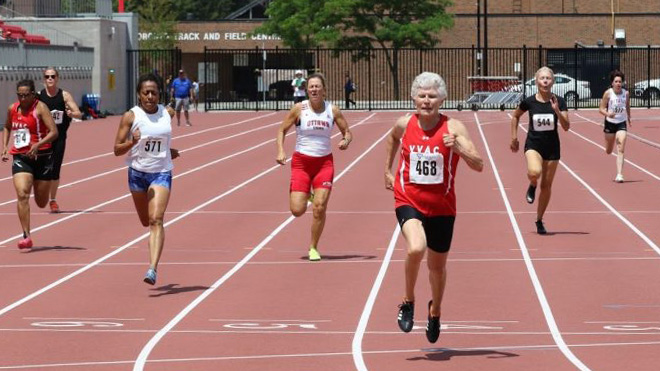 Karla del Grande completes her first WR sweep with a 29.21 for 200 in Ontario championships at site of 2020 Toronto worlds.

And a masters mole tells me: “Due to a timing glitch in the 200-meter race, Karla and another competitor had to rerun their race about 30 minutes after the first race. We will never know what her time was in the first race, but am guessing it was probably a world record, judging by her other results.” Karla del Grande ran back-to-back WRs in Ontario and Canadian masters nationals in the 100 and 200.

Besides Christa Bortignon’s WR (noted earlier), also setting a pentathlon WR at Surrey was M85 Ted Rowan, whose 3635 points beat the listed mark of 3470 by Japan’s Shinichi Terao in 2016.

Karla, Carol and Ted are all entered at Malaga worlds. (And Christa is entered in seven events.)

Nadine, our friend near San Diego, has been in contact with Karla and shared her thoughts about her and Carol:

“She is absolutely amazing and I have long admired her and Carol. They are not only talented, hardworking athletes, but also very kind, helpful human beings continuing to do worthwhile things that make a positive difference to their friends, families and communities.”