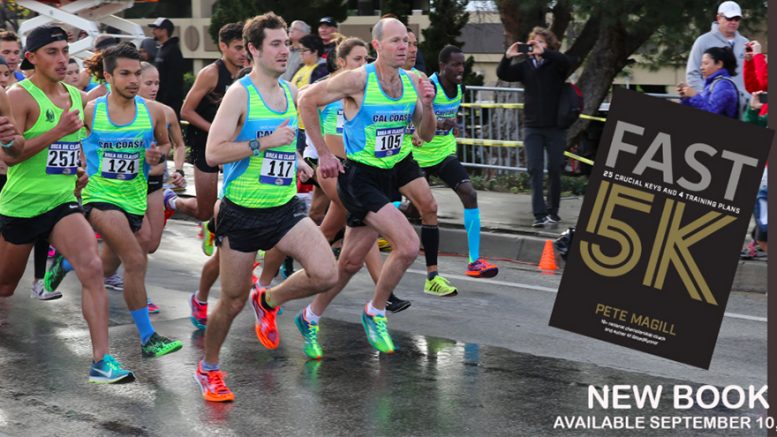 Pete Magill, leading his Cal Coast team in a road race, proves even the scalp-gifted can triumph over the hairy.

Pete Magill is a Masters Hall of Famer whose fame grew out of setting 5K records and leading teams to cross country titles. But for all his talents, I’m more awed by his mastery of writing.

Picasso was great at painting and Paul McCartney wrote fantastic songs. But where can you pick up a book by these legends that tells you how to improve your drawing or tunesmithing?

Coach Pete, a one-time Hollywood screenwriter, combines his deep athletic/academic understanding of his favorite distance with his conversational and down-to-earth writing style in “Fast 5K.” (Read a preview here.)

The only question the newly published book doesn’t answer: What TOOK you so long, Pete?

Of course, runners of all ages and abilities have already benefited from his magazine columns and blog posts (R.I.P, Younger Legs for Older Runners.) His previous books — “The Born Again Runner,” “Build Your Running Body” and “Speed Runner” — are already classics and worth rereading.

But now that Pete, 58, has put fingers-to-laptop on 5,000-meter physiology, training, racing, injury-prevention, diet and lifestyle-maintaining, he says he’s calling it quits — as an author. (I wrote him: But you haven’t written yet about beer miling or joggling!)

“Fast 5K” is a quick read at 184 pages. Budget a couple hours. But you can inhale chapters at your leisure and still build a runners mind.

I read a preview PDF in June (for the sake of a blurb), and reread the book in hard copy today. And I’m struck by his pacing, organization and chapter structure — master classes in authorship. (I should also give credit to his editors, too.) Can I steal your formula when I finally get to writing my memoir “Anything Worth Doing is Worth Doing Poorly”?

In soliciting my promo, Pete wrote that “Fast 5K” is a redo of a self-published book called “25 Keys to Running a Faster 5K” issued two years ago. “It’s rewritten (and, honestly, much better for the effort) with lots of new charts and tables — one for each key,” he wrote me in May.

The book’s subtitle is “25 crucial keys and 4 training plans.” But “Fast 5K” is much more than a running listicle (and far deeper than anything you’ve seen in Runner’s World).

It’s in four parts — “Training Keys,” “Lifestyle, Diet & Gear Keys” and “Race-Day Keys” with 50 additional pages of sample workouts and training plans. It’s easily customizable to geezertrack. (He mostly tells you how long to run, not how far — although he repeats the story of how he wears no watch when he goes on certain runs.)

But actually, Pete lies. He gives us a 26th tip — a “Bonus Masters Key,” which says: “There are no super-secret adjustments of workouts for masters runners. We have to do the same training as younger runners — just a little less of it, at a slightly reduced intensity, with a little more time between hard workouts.”

That you knew. But I like where he calls masters training a “no-mistake zone.” That means older runners pay a stiffer price for running a rep too hard, not getting enough sleep or failing to do sufficient warmup.

(So my take-aways: I’ll sleep in more, run reps easier and do a great warmup and go home.)

Pete took pains in previous books to explain runner physiology — capillaries, mitochondria and the like, and the need to exercise all three speeds of twitch fibers. He’ll refresh your memory in “Fast 5K” but doesn’t get bogged down in medical stuff. Just enough to persuade you he’s prepping your body smartly for improvement.

The book has a “one hand clapping” vibe — sometimes stressing that “less is best” while also saying: “Don’t skip the small stuff.”

For example, he recalls how masters middle-distance legend Nolan Shaheed would forgo the last interval in a hard reps workout — “since that’s the one that injures you.” Pete also rails against “junk miles” and begs us to do drills and exercises to prevent junk injuries.

“Fast 5K” basically aims to help runners from beginners to elite figure out how to set and reach their goals. Its dozens of charts are worth the price of admission (retail $19.95 from Velopress, but cheaper other places, including $13.97 for Kindle version.)

And best of all! You get to see what I have in common with Amby Burfoot, Steve Scott and Claudette Groenendaal. (Spoiler: Our blurbs all appear in the opening pages.)

Mine went: “Pete’s latest marvel of scholarship is a hoot to read and a treasure to follow. Pete explodes all ignorance while sharing the most intelligent steps to 5K excellence.”

But the one I submitted actually said: “Coach Magill? Record-setter Magill? Pete’s encyclopedic knowledge of 5K training, racing, physiology and philosophy rates doctor status — even if it’s Dr. Seuss. His latest marvel of scholarship is a hoot to read and a treasure to follow. Pete explodes all ignorance while sharing the most intelligent steps to 5K excellence.”

Pete wins in the end. Less is better.