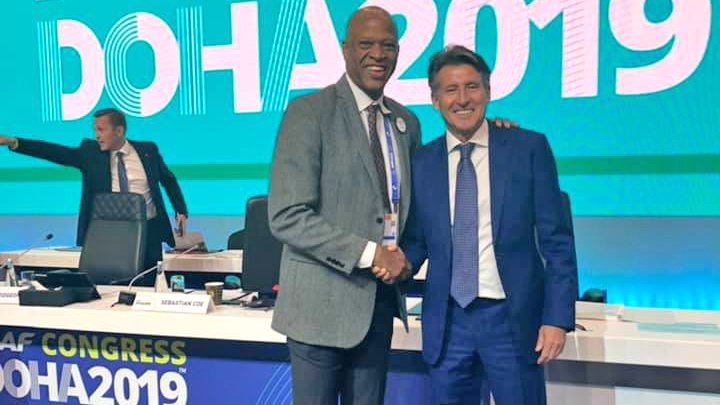 Willie Banks and Sebastian Coe were both winners at Doha. Seb was re-elected unanimously as IAAF president.

I had a half-hour call Wednesday with my friend Willie Banks, M60 high jumper and newly elected IAAF Council member. The result was a story in Times of San Diego. I focused on how he won election and what he hopes to do for the sport overseen by the newly renamed World Athletics.

But of course I mentioned my pet peeve — the failure of IAAF world meets to always include masters exhibition events. Beijing and Portland had such events. London and Doha not.

Since the successful participation of Masters Athletes in the 2015 IAAF World Track and Field Championships held in Beijing and the 2016 IAAF World Indoors held in Portland, Oregon, USA, it was disappointing to be denied an invitation for Masters to compete in the 2017 IAAF Championships in London and the 2018 Indoors Championships in the UK. WMA tried hard to change this situation, and were supported by the IAAF Masters Commission but to no avail. We have not given up on this matter and will continue to pursue an involvement in future IAAF World events. No acceptable reasons have been provided to WMA for the exclusion of Masters events from IAAF
Championships.

Willie heard me out, and volunteered more info. He told of his visit with WMA President Margit Jungmann in Doha (she’s apparently on the who-knows-what-it-does IAAF Masters Commission).

Willie told me: “I just met with the new president of the masters, WMA, and she and I had tea together, And I told her I’m extremely supportive. And whatever I can do — they’re only getting like $8,000 a year. [Not sure of that. It was $80,000 five years ago. — ken] We’ve got to do better. I told her that I would be a champion of masters track and field. So don’t worry – I’m right there with you. I even got my WMA pin on my lapel.”

So there you go.

I’m not hoping for miracles, but a seat at the table is always better than being on the menu. And we’ve been an appetizer for decades.

I’ll monitor Willie and the Council and keep you apprised.

Besides masters events at worlds (and even the Olympics), what masters initiatives would YOU like Willie to work on?